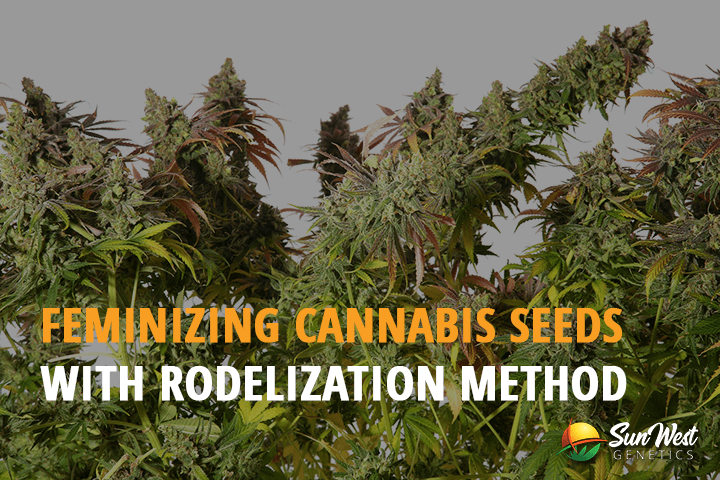 These days, cannabis has been very popular that legalization around the world has attained its own voice and is now pretty famous. In line with this, people are not only using marijuana at a high rate. They are actually growing them. And one of the best ways of growing cannabis is to use feminized seeds. People know the benefits of using feminized seeds. But what most do not know is how to feminize cannabis seeds.

But before we get to that point, it is important to first know more about feminized cannabis seeds.

What are Feminized Seeds?

Did you know that, like most other organisms on the planet, cannabis plants can also be either male and female? That is right! Marijuana plants have sexes too, and each one of those sexes has their own specific functions.

Male marijuana plants serve the purpose of impregnating nearby female cannabis plants by pollinating them. They develop pollen sacs that burst open to release pollen that would reach female plants thereby allowing these females to acquire the males’ genetic makeup to produce seeds. Essentially, their main and unique features are their pollen sacs.

Meanwhile, female marijuana plants do not have pollen sacs. Instead, they have buds that produce all the THC and cannabinoids that make cannabis the popular plant that it is. And if ever female plants get in contact with pollen from male marijuana, there is a good chance that it would get pregnant and produce seeds.

That said, it is worth to note that only the female cannabis plants develop buds. And as mentioned, all the cannabinoids can be found in the buds. That means that males, who do not have buds, are essentially useless if you only want to focus on producing buds you can sell or personal use. What that also entails is that having more females will be better for you if you want an efficient setup.

But the problem is that marijuana seeds have a 50-50 chance of growing up to be either male or female. There is no way for you to tell whether a regular seed will grow up to be a male or a female. This is where feminized seeds come in.

Feminized marijuana seeds are great for those who want to maximize profits because of the very fact that they only produced female cannabis plants. And if you want to make sure that you no longer have to pluck out male plants before they impregnate your females, you should always go for feminized cannabis seeds.

The Rodelization method is arguably the simplest and most natural way for you to feminized cannabis seeds because it does not involve using chemicals or external factors that can be harmful or even dangerous to your health in the long run. As such, you may want to use a more natural yet a bit less reliable way to make your feminized cannabis seeds.

The premise seems pretty simple. Female cannabis plants can turn into hermaphrodites and will develop pollen sacs that are supposedly exclusive to male marijuana. This usually happens when you leave them in their flowering phase longer than needed. The reason for this is that the female plant is trying to impregnate itself to produce seeds.

However, that is not always a bad thing. You can actually collect these pollen sacs from the hermaphrodites and use them to manually pollinate your chosen female plants. Seeds that are produced this way will most likely turn out to be feminized seeds because of the very fact that they both come from female parents.

There are a few issues using this method. The first is that you are banking on hermaphroditism, which usually does not always happen especially now that a lot of producers of feminized cannabis seeds try to minimize hermaphroditism from happening. And if hermaphrodites do not sprout out, there is no other way for you to produce feminized seeds if you are merely relying on the Rodelization method.

Another issue you need to know is that using feminized cannabis seeds that were produced using this method have higher chances to become hermaphrodites themselves because they have the genetic attributes of hermaphrodites.

But if you happen to get past these issues, then you will be able to enjoy using the Rodelization method because of how simpler, easier, and more natural it is to do than other methods of producing feminized cannabis seeds.