Home » Blog » Everything You Need to Know About Cannabis Hash

Everything You Need to Know About Cannabis Hash 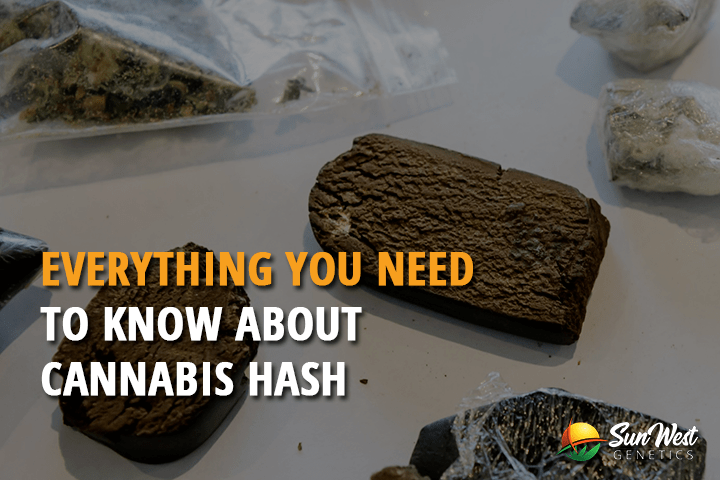 Hash is known as one of the most potent forms of cannabis. It goes by different names but to people who make concentrates, this product is known simply as HASH. If you are interested in making concentrates or you’re just curious about the different ways to consume cannabis, you must understand what hash is and how this is made.

To fully understand cannabis hash, we have to go back in history and find out when this form of cannabis was used and how it’s used. You will be surprised that this is not an entirely new process. Hash making has seen dramatic changes but still, some people reply on crude, traditional methods.

One of the earliest cannabis concentrates is hash or hashish. This word is recognized all over as a very strong form of cannabis because it is in its pure and unprocessed form. There are traditional methods of hash making but most use minimal heat and pressure.

Hash was first enjoyed in Eastern Asia. This was known as “Charas” in Hindi which meant hashish. What they did to harvest chars was to hold a bud to harvest the delicious hash. Then the hands are rubbed on a coarse material like a piece of cloth to collect the trichomes.

The trichomes are compressed and collected to make tiny balls and this is sold in the market as a potent and unprocessed hash. If you travel to these areas today, you’ll still see locals openly selling hash this way. They might ask you to try before you buy while some are not too accommodating.

Hash was already popular in many areas in Asia but it was in the 12th century when smoking this product started. Smoking hash became a sensation, especially in the Middle East. It was also during this time when different tools to smoke and consume hash were also invented.

Soon, new ways to process hash were conceived. These methods were used to create purer substances. Hashish is a term for grass and in Arab nations and this was made by passing cannabis buds through a sifter or a sieve. This process was called dry-sifting and included low temperature and low pressure in making commercially –processed hash.

Dry-sifting involved passing the buds through the sieve to separate the resin glands from the flower and other unwanted plant matter. These parts are discarded because workers want pure and potent products. The result of dry-sifting is dirty white trichomes with a powdery appearance. The end product is called kief. KIef is heated and then pressed to make blocks of hashish.

In countries like Lebanon and India, hashish is openly traded to different countries to manufacture different kinds of products. There are only a few techniques to harvest the resin glands from the buds but for an average manufacturer, a three-stage grinder is used to make kief. A three-stage weed grinder will create fine dried buds with pure and very potent results.

During the grinding process, the buds are loaded inside the first chamber and the trichomes will then pass through a mesh screen. Trichomes will be removed from the buds when agitated as it passes through the screen. Afterward, the third chamber agitates the trichomes further to filter all plant matter that can affect the potency and the aroma of the product. Then, the trichomes will be harvested and used to make a variety of concentrates. This may also be smoked and called kief.

New methods to make concentrates are more efficient and can produce high yields. Some manufacturers use high-tech machines and tools to make a traditional hash and concentrates. There are some people who have tried their luck at making concentrates at home using household items. These are not recommended because these use dangerous chemicals and can cause terrible accidents.

A solvent is a liquid used to dissolve a solute which creates a solution. Using solvents for extraction, you use a solvent to separate the psychoactive compound THC from the buds and plant matter. At present, there are a few solvents manufacturers use for making concentrates. Solvents like butane, carbon dioxide (CO2), propane and alcohol are the most common. A solvent will be fed inside a chamber with dried weed. The solvent will separate resin glands which contain THC.

When it comes to non-solvent extractions, water, temperature, and pressure are used to extract THC from the buds.

Hash making using traditional techniques is effective but yield low and the final product is mostly contaminated with dirt, oils and unwanted plant matter. These impurities can severely alter the smell, taste, and effects of hash. This is the reason why solvent and non-solvent based extractions were developed.

Solvent-based extractions are very efficient but chemical solvents are flammable and are dangerous in the hands of an inexperienced hash or concentrate maker. A “closed-loop” system is used by professional hash makers to prevent the exposure of concentrates to the contaminant. A closed-loop system is also used to reduce fire and explosion.

Safety should never be overlooked. It is very dangerous to make these concentrates at home so as much as possible, concentrate-making should only be done by professionals.

Butane hash oil is also called BHO and this uses butane as a solvent. BHO can give you a number of end products which possess varying potencies such as shatter, wax, sap, budder and more. Using butane is dangerous and you should never attempt to extract unless you are trained to do it.

Using butane is exactly similar to the steps mentioned above and as much as possible, use a closed-loop system to prevent explosions and fire.

A better and safer way to extract concentrates is using CO2. This is safer because this is natural gas. Temperature and pressure are used to remove concentrates from the bud and the plant matter. Special equipment is used to perform CO2 extractions.

Propane hash oil is also known as PHO and this uses propane as a solvent. PHO requires a higher pressure and lower boiling point. This solvent-based extraction process is favored because of its terpene preservation and more effective purging results.

PHO creates concentrates similar to BHO such as shatter and wax. This is more popular because the final product is cleaner and comparable to BHO. However, propane is more expensive than butane gas.

Isopropyl alcohol or ethanol is available everywhere and is a safer method for concentrate extractions. The method is called QWISO which stands for quick-wash isopropyl alcohol. This process is done quickly and uses only minimal equipment and tools. Ethanol is more preferred because it can be used and reused. The high recovery rate is very much welcome because ethanol is quite expensive to purchase.

Concentrates created by non-solvent extractions are preferred due to their smooth effects that highlight the strain’s aroma, flavor and effects compared to products that were made using solvent-based extraction.

The best quality of frozen cannabis flowers is used. These do not contain chemicals which can affect the natural chemical structure of the plant.

Kief is one of the oldest types of concentrate and this can be made in a natural process of moving the buds in between your fingers. Sophisticated equipment may also be used such as a three-chamber grinder with a screen to easily collect the trichomes. Processing of kief is done in a day and can last for a week depending on the material that you want to make. Longer processing times are done to get the best consistency of the kief.

High-quality kief has a fine texture and is achieved after days of processing. The color is light brown to brown in color. The smell depends on the strain that you used to harvest the trichomes. This cannabis concentrate is more potent than other forms because the buds used here was not changed in any form.

Meanwhile, live kief uses a fresh-frozen flower. The plant was cut during harvest and then frozen after. Doing so keeps the cannabinoids and terpenes in an actual plant. In making live kief, a liquid nitrogen bath is used to remove the live kief. The final product is very potent and has a flavorful and aromatic characteristic. The aroma is similar to the fresh cannabis plant and flavors are stronger than other concentrates.

Another form of non-solvent concentrate is bubble hash. This is also known as water hash or ice water hash because this is made using ice, water, and a fine micron bag. Ice and water will freeze the trichomes to be able to remove these easily from the buds. The bag will remove plant material and any residue.

Full-melt bubble hash is produced just like bubble hash but this is considered to be more refined. Full-melt is mostly used for dabbing or vaporization. The fresh-frozen flower is used for making this concentrate and usually, the whole plant material is used and not just the buds

Another kind of kief is dry sift. This is a refined hash made by using manual or mechanical extractions with the use of screens. The product is passed through a sieve where it is placed over and over again to preserve the trichomes.

Full-melt dry sift is the highest grade kief with 90% trichome resin. This is ready to be dabbed. Meanwhile, half-melt dry sift contains both trichome heads and stalks. Kief is low grade when it has the most number of plant contaminants and therefore it is not good for dabbing.

Rosin needs a machine that will provide heat and pressure. These machines will isolate essential oils from the trichome heads. The end product looks similar to the solid resin. Rosin is the easiest and the safest way to make concentrates. A rosin press is a machine that can provide the right amount of heat and temperature to make rosin.

Rosin is the key ingredient of making other kinds of concentrates. And since solvents are not used the natural structure of terpenes and cannabinoids are intact in the flower. The end result is hash with flavorful and very potent effects.

Always find out more about the effects of the strain so you will have an idea about the side effect of the concentrate. Use hash in moderation and just enjoy the effects.

As long as recreational cannabis is legal from where you’re located, you can experiment on different hash concentrate forms. Make sure that you are buying only quality concentrates from a reliable, legal distributor. Never buy from black market sources. As much as possible, never make concentrates especially solvent-based concentrates unless you’ve done appropriate training.

If you are taking a hash and other concentrates for a medical condition, always stick to your doctor’s prescription. You’ll surely have lots of fun when you use hash cannabis concentrates.