10 Medical Cannabis Strains for All Kinds of Health Problems 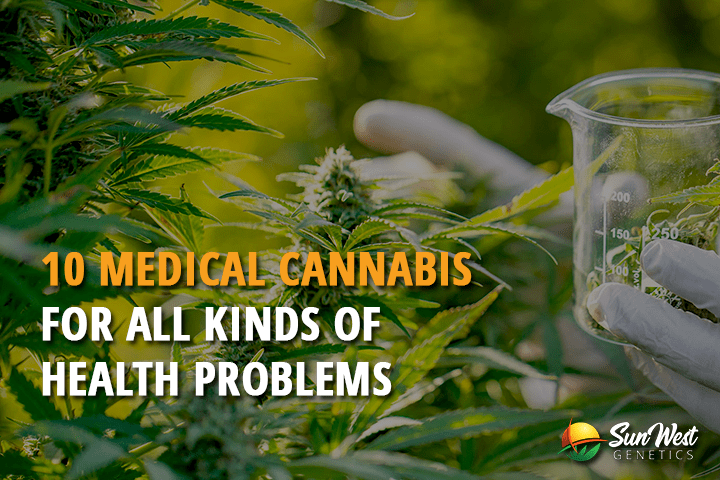 The use of cannabis in the medical field is one of the greatest contributions of the cannabis industry up until now. Medicinal cannabis not only treats simple pain and aches but it also has the ability to treat chronic illnesses. In this article, the best medical strains that help treat different kinds of health problems will be tackled.

This strain is known as the all-star marijuana strain because it can give a potent high while it can act as a powerful medicinal strain. It has a balanced ratio of CBD and THC which is 12% CBD and 15% THC level.

The high caused by THC has energy booster properties that won’t give you couchlock but it will definitely make you creative and focus the whole day. The common usage of this strain in the medicinal field aids in the loss of appetite, pain, depression, and anxiety.

This strain is a relatively high strain with THC and CBD levels of 12-15%. Its Indica-dominant traits make this strain outstanding for its medical benefits. It has the flavor and aroma of coffee with hints of fruity flavor.

This strain has a THC and CBD ratio of 5:2 which is intriguing. It may not have the usual THC level but it would still give a relatively high potency because of the high level of CBD. This strain came from three powerful Sativas: Swiss Sativa, Thai Sativa, and Columbian Gold all have healing properties that are why Harlequin Strain has extravagantly medicinal properties.

This strain has a pleasant flavor and aroma of balanced sweetness and spiciness. It has beautiful yellowish-green leaves that have orange pistils. This strain is a great help to combat inflammation, chronic pain, and fatigue.

This Indica dominant hybrid strain has a wide range level of THC and CBD that is influenced by its parents CD-1 and Oldbury. It has a 10-15% THC level and 15-20% CBD level that gives a therapeutic high with a relaxing vibe suitable for those who are experiencing fatigue, stress, and anxiety. This strain is also helpful for those who are suffering from the effects of chemotherapy and radiation because of its balanced energy and relaxing properties.

The color of this strain has the shades of purple and exhibits the flavors and aroma of sweet berries and citrusy lemon. This strain can be grown outdoors and in cold climate where its characteristics are amplified.

This strain has an aroma of earthiness and spiciness that is exhibited through its long and dense nugs with amber and crystal trichomes. It will grow tall and thin in outdoors that will give you relatively high yields.

This strain has a relatively high level of THC and CBD. Its THC level is at 12% while its CBD level is at 14%. It has an appealing appearance of its medium-sized buds that are spherical in shape and its orange and pink pistils compliment its fluffy leaves. Aside from its appealing appearance, this strain has embedded the smell of berries and grapes with subtle notes of hash.

Its physical effects release waves of relaxation accompanied by feelings of well-being making it a great strain for those who are stressed, depressed and for those who are having panic attacks. This is a daytime strain that can be partnered up in exercising, hiking, and sex.

This strain is crossbred from Cannatonic and Sour tsunami that has a high potency level between its THC and CBD level. It has a THC level of 11% and a CBD level of 10%. It offers a clear-headed high that won’t give you any disorientation and it as the typical effects of cannabis that brings complete relaxation.

Once ground, you’ll smell a very pungent aroma of citrus fruits, sugary candy, and floral with hints of earthy tones. This strain is small despite its dense appearance. It has an orange pistil that complements its dark green leaves.

This strain has an Indica and Sativa properties from its parents G13 and Lemon Skunk. This strain has a THC level of 15.9% and a CBD level of 11.39% making it a truly potent strain. Another thing that is remarkable about this strain is its smell that has strong notes of lemon and pine. It also has a fluffy nugs appearance that is highly frosted with white trichomes.

This strain will give you out a complete euphoric and uplifting high that will consistently give you a clear-headed high with a peaceful state of mind. This is a perfect strain for those who want to take a break from the pain. It is also widely used to treat some mental disorders such as PTSD, depression, and anxiety.

This strain is considered as a CBD-rich strain because of its ratio over the level of THC. It has a 15% CBD level and a 12% THC level making it an ideal strain for a potent medicinal and recreational strain. This strain got its characteristics from its parent Chemdawg and that is a member of the Diesel family. You will be delighted to try this strain because of its distinct scents of lemon, pepper, spices, and diesel.

Since this strain produces an aromatic resin is great for extractions. This strain is great for chronic pain and for mood enhancer that will last for hours. Just watch out for couchlock and munchie feeling when overdosed.

This strain is an Indica dominant strain with a balanced level of THC and CBD at 11%. These two cannabinoids offer medicinal assistance for both mental and physical pain such as fatigue,  depression, chronic pain, and muscle spasms. The effects of relaxation focused, and arousal can be felt within 15 minutes.

As it grows maturely, it exhibits a thick cast of white resin glands. It has a pleasant taste and aroma of sweet onions that gives a smooth smoke on the lungs.

This strain type has properties that stimulate the mental stimuli to bring the feelings of well being that boost the mood. This type of strain is good in combating depression, alertness, and focuses on making it a good daytime strain.

This strain type has properties that stimulate the bodily sedative effects to combat different kinds of pain that can be felt throughout the body. This is an effects type of strain is recommended for the relief of muscle spasms, seizures, and for those who have sleeping problems making it a nighttime strain.

This strain type consists of well-balanced characteristics of a Sativa and Indica strain making it an effective treatment for diagnosis related to both mind and body.

It protects your body and brain

It contains antioxidant properties that prevent the damage that the free radicals may cause. Exposure to medicinal cannabis prevents neurodegenerative disorders like Alzheimer’s disease from progressing.

It acts effectively on the vanilloid receptors in the brain to regulate pain and inflammation making medicinal cannabis effective in treating fibromyalgia.

It is an effective digestive aid that stimulates appetite for faster calories and nutrients absorption. It also suppresses nausea wherein the food intake will stay where it is supposed to stay. These two benefits of medicinal cannabis are also helpful for the side effects of cancer.

The adenosine and serotonin are both receptors in the brain that are responsible for the feelings of Anxiety and Depression. When it is consumed, it will interact with these receptors to lessen paranoid feelings and anxiousness. It also lets serotonin releases antidepressant properties to ensure that you will be feeling relieved.

Disorders such as schizophrenia, ADHD and Alzheimer’s can be treated if there is an increase in serum anandamide levels in the brain. CBD is an effective way to treat different kinds of psychotic disorders because it has the ability to increase in serum anandamide level without providing the patients with serious side effects that other pharmaceutical medicines are given.

If you have vices such as smoking a cigarette or in smoking heroin CBD has the ability to help you quit these habits because CBD is known to eliminate cravings for nicotine and it will help you cope with the withdrawal symptoms.

It is indeed that cannabis is a versatile plant that has a lot of benefits recreationally and medicinally. The cannabis industry is still innovating especially when it comes to the medical field where it has already benefited a lot of patients manage all their pains.