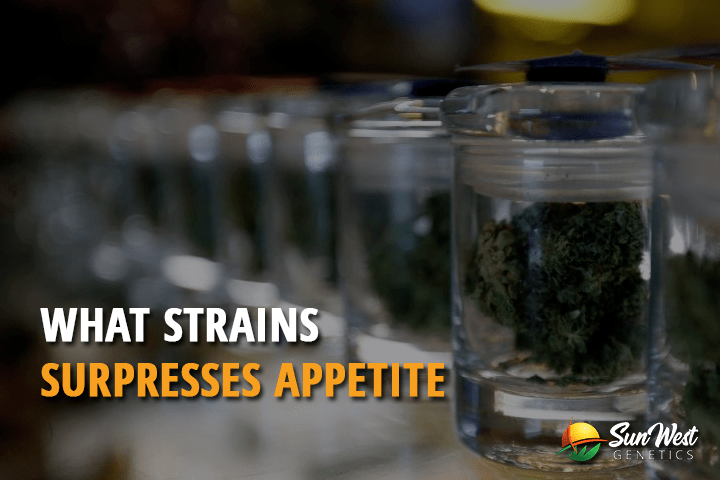 Marijuana Plants, as we mentioned before, are miraculous herbs that can help us in almost the majority of our health concerns- from cancerous illnesses up to treating our irregular sleeping patterns- name it, the weeds can heal it. This is how powerful a single Marijuana strain is and it can change you for the good.

But you might wonder, can these plants help you lose weight? In these times where most of us who work almost every day for 8 to 12 hours, we don’t have the luxury to hit the gym and burn fats ‘til we achieve that perfect body. This is where this plant steps in. Marijuana plants can help you lose weight, by simply pushing you to eat less and feel better. Here are the Strains that Suppresses your Appetite.

How Can these Strains help you decrease your appetite?

According to a 2011 Study of the American Journal of Epidemiology, regular Cannabis users have a thinner waistline than those who do not use Marijuana at all. This phenomenon happens with the Marijuana users is directly attributed to the chemicals embedded in each strain.

In another study conducted by a team of Canadian doctors and scientist last 2015, they have proven that the THC directly inhibits a person’s cravings to eat. To simplify, the THC diverts your mind and focus on being happy, and do productive activities, instead of sitting down and eating anything you want to consume.

A hybrid Marijuana Strain coming from Jack Herer and G13 Haze, this strain gives you the ability to avoid eating more while kicking you to be happy, relaxed and feel uplifted. It has a THC volume of up to 24% and ideal for morning use.

It can help in treating different health conditions such as Depression, Body Pains, Fatigue, and Stress. Its flavors range from Pine to Citrus and Lemon-like.

But before considering to plant this strain, be sure that you are well-experienced in planting Marijuana Strains because an XJ13 is not as easy to grow like the other existing plants.

Another prominent Hybrid Marijuana Plant, Blue Dream is a cross-breed of Indica Blueberry and a Sativa Haze. This perfect match gave way to this powerful child which can deter your appetite and encourage you to do more than eating.

It has a THC volume of up to 27%, one of the highest in the present times but this strain has managed to sustain a 2% CBD in its system, somewhat neutralizing the intense effect that THC can do with your body. Its flavor ranges from Blueberry, Sweet, and Berry-like.

It is good for treating body pains, headaches, nausea, and depression, while keeping its users, happy, uplifted, creative, and relaxed. Like the XJ13, it also needs an experienced skill before cultivating this plant successfully.

This rare Sativa plant is known to have a high THCV content, powerful enough to neutralize Parkinson’s Disease, panic attacks, and other sicknesses related to abnormal involuntary muscle movements.

Doug’s Varin is also known to promote bone growth, aside from cutting your appetite quality and inhibits you to eat more, unlike the other strains which encourage you to grow bigger by eating beyond what is required.

This strain helps in treating inflammations, body pains, nausea, depression, and stress. At the same time, it encourages you to be energetic, focused, uplifted, and euphoric.

Its flavors range from woody, earthy to lemon.

Let’s move with a strain that has a lower THC volume than the earlier strains that we feature. Cannatonic is a milder strain with 6% THC and 2% CBD volumes. It is good for the afternoon sessions and encourages its users to be relaxed, uplifted, happy, and focused.

This strain is a cross-breed of a female MK Ultra and a male G13 Haze. Due to its hybrid nature, it can effectively cure different health conditions such as muscle spasms, migraine, headaches, and other psychological symptoms as well as other body pains. Apart from these things, Cannatonic also discourages its users to eat, making it one of the most effective strains to help you lose weight.

Its flavors range from woody to earthy, then citrus.

This strain got its name due to its evenly balanced ratio of Indica to Sativa Strains (50:50). Electrically, Alternating Current and Direct Current repels with one another and emits a balanced flow of electric energy. Known to give happiness, ACDC can ‘electrically charge’ and make someone feel euphoric and peaceful.

ACDC is a cross-breed from Cannatonic and Cannabis Ruderalis, with 6% THC and 16% CBD Content. Its CBD content inhibits the users to eat, instead, it encourages them to relax, feel happiness, be uplifted and sleepy at the same time.

Apart from this, patients with alcoholism and other medical conditions such as seizures and severe pain can be treated with this strain. In general, this CBD strain can make its users happy, euphoric, peaceful and sociable.

Its flavors range from woody to earthy and pine.

Named by Snoop Dogg, this Sativa strain is one of the most prominent strain in the year 2011 due to its rebranding. Green Crack came from Skunk Number 1, another known strain. However, its lineage is still in dispute as other accounts tell another involved strain where the Green Crack came from.

Green Crack has an average THC content of 24%. This strain is good for morning use and is known to cure headaches, body pains, fatigue, stress, and depression while keeping its users energetic, happy, uplifted, and focused.

Its flavors range from earthy to citrus and sweet.

Another prominent Sativa Strain, Super Silver Haze has earned recognition and awards way back in 1997, 1998, and 1999. This strain is a triple cross-breed of Skunk, Haze, and Northern Lights. Its THC content is 23% and lies within the average of any Marijuana Strains.

This strain is known to treat stress, depression, fatigue, and pain. It also encourages its users to eat less while promoting being energetic, happy and uplifted.

Its flavors range from earthy to citrus and sweet.

Due to its many awards, Super Silver Haze is highly regarded as one of the most awarded brands in the world of Cannabis Industry from the 1990s to present.

Considered as one of the most sought-after Medical Strain in the world, Remedy is a cross-breed of Afghan Skunk and Cannatonic. The Remedy is known to soothe your body pains in minutes and leaves you relaxed, like a young guy enjoying a weekend getaway at European lakes.

Contrary to the rest of the strains, Remedy has a whopping CBD content of up to 15% while its THC is only 1%. Due to its chemical content, this strain is suitable for evening use, encouraging you to not eat more than the average during your dinner.

It cannot make you high as this strain is moving silently to treat your illnesses and poses no psychoactive effects. Also, it directly suppresses your irregular muscle movements with no harsh movements. Magically, it lets you fall asleep as the chemical ‘repairs’ your whole body for several hours.

Its flavors range from skunky, earthy, to flowery.

Harle-Tsu comes from 2 dynamic Strains-the Sativa Harlequin and Hybrid Sour Tsunami- that produced better offspring with abundant CBD Content. Instead of giving you a high, Harle-Tsu gives you a sudden mellow, peaceful and relaxing feeling.

Its CBD content ranges from 18-22%, making it one of the most powerful CBD-Dominant strain in the present times, with an all-time low THC content of less than 1%. It is very rare and considered as one of the effective strains to make a person feel a full stomach, discouraging its users to eat more.

This strain applies to people who work in daytime who experience consistent body pains. Also, Harle-Tsu provides you an effective source in being an energetic and inspired one in working.

Named after an infamous British criminal, Jack the Ripper is a cross-breed of Jack’s Cleaner and Space Queen. This Sativa-Dominant strain has a THC content of up to 17% and has almost no CBD contents at all.

It is known to deal with Stress, Depression, Pain, and Fatigue, while making its users feel happy, energetic, euphoric, and uplifted. The flavors range from pine, then lemon to citrus.

However, there are records that Jack the Ripper exceeds its average THC Content up to more than 20%. Some say that it reached up to 35% when taken good care and kept its concentration.

Now that we have provided you the list of the Strains that are good for lessening your appetite, you can now try one of these strains and see it for yourself if you will eventually lose weight after weeks of use. Remember that you should not purely depend on these strains, rather, you have to take workouts and fitness programs as well.