What Kind of Light do Autoflowering Cannabis Seeds Need? 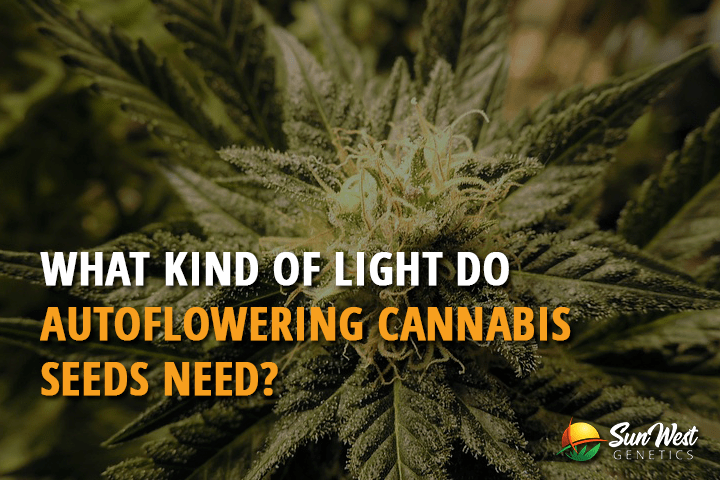 The data, however, was not uniform across all types of cannabis plants. Some marijuana plants were still healthier when grown in the soil. The point, however, is to prove that plants grown through hydroponics were still able to match traditionally grown ones in terms of nutrient content.

The light you see coming out of one of these diodes is created by the movement of electrons within the semiconductor material that goes into diode construction. This is different from a standard incandescent bulb in that there is no filament you can burn out, that would cause you to have to replace your LED. This means that LED lights are the best answer on what kind of light do autoflowering cannabis seeds need.

This difference also keeps LEDs at lower temperatures, which is safer for plant growth. Most LEDs have a lifespan similar to that of a transistor, which is many, many times the lifespan of a traditional incandescent bulb. LEDs function well as long as they’re connected to an electrical circuit.

The good-quality panels will often clock in 50000 hours with next to no hiccups. This is almost 6 years of work, which is WAY more than you can expect from basic incandescent bulbs or really any other kind of light used for growing cannabis.

CMH lights hold second place with 20000 expected hours, which is less than half, in comparison! This is why finding a high-quality panel that suits your needs is important. Unless something unexpected and drastic happens, you can use that panel for years and years. That way, if you’re selling home-grown crops, the lights pay for themselves tenfold, and you have suddenly turned your hobby into a lucrative business.

Light-emitting diodes (LED) are made of semiconductive materials and emit light when an electric current is passed through. They’re not the only kind of light you can invest in, and it’s important to know the differences before you spend your money.

Compact fluorescent lamps (CFL) are made of phosphor, glass, ceramic and metal, and use a third of the power of a regular iridescent bulb, making them a competitive choice. However, let’s compare the two thoroughly and see what we can conclude.

LEDs are more power-efficient overall. They not only give a better yield for the same amount of power used, but they also turn more energy into light and less into heat. You don’t want to keep things too hot since it can damage both your plants and the space they’re growing in.

CFLs also require more daily maintenance and adjustment. While this isn’t some 5-hour hassle that will keep you housebound while your friends are having fun, it’s definitely a chore you have to be prepared for. However, there’s some convenience to be found here, too.

LEDs are stricter when it comes to how far from the plants they need to be to ensure good growth. While CFLs work well only a few inches away from the plants, LEDs need to be anywhere from 12 to 18 inches away. This isn’t a small distance, and it could mean you don’t have the space to invest in these lights. However, if you do have space, LEDs win out overall, especially if you’re worried about power-efficiency.

HID (High-intensity discharge) lamps are composed of a tungsten electrode housed inside a fused quartz or alumina tube. They’re often used in combination with an LED panel to increase the quality of buds produced by your cannabis. While LEDs are known to improve the smell and taste, HID lights bring out the healthiest look in your buds.

LEDs also cost more on average, but this comes with some increased convenience. They’re much easier to set up, as they don’t require a ballast or other similar tool. The thing to go with here is multiple smaller LED panels over fewer big ones.

If you don’t have a system in place for getting rid of heat, LEDs are practically your only choice. They’re the only kind of growing light to not produce a considerable amount of heat while operating. HID lights do fine when you have ways of keeping the heat out, especially during the flowering stage.

The main benefit of HID lights is how much bang you get for your buck. They yield the most for the same amount of power, and if this is your main priority, they should be as well. Otherwise, stick with LEDs, since they offer better bud quality overall.

If you’ve paid attention so far, you’ve noticed that LED is objectively the best in most categories to grow indoor autoflowering cannabis seeds. While some brands kick up the price a bit, you get the best results in the end. Here are all the reasons why LED lights are your top choice:

The buds are at their peak quality after being exposed to LED panels. While some other lights make them look prettier, that shouldn’t be your primary concern. While you need a bit of space to utilize an LED panel properly, they’re magnificently easy to set up and require no maintenance once you’re done.

The heat levels are manageable, as LEDs convert energy into light efficiently, without generating too much excess heat. This lets you more conveniently organize your workspace, as you don’t need to arrange this whole system for draining heat.

These panels give great yields in exchange for not great amounts of power. If you combine them with HID lights during the flowering stage, you will get a ton of produce without sacrificing bud quality. LEDs tend to come in a variety of price ranges, so you can usually fit some into your cannabis-growing budget. This means you don’t have to settle for inferior lights just because of money reasons.

At some point, researchers discovered that indoor autoflowering cannabis seeds can be grown using two-band lights. These lights appeal to the main two ranges at which a plant’s chlorophyll receptors are active. This range of increased activity is known as PAR (Photosynthetically Active Radiation). Don’t be too worried about this term, what matters is further findings.

While you can technically grow plants using only two-band light, it’s far from ideal. The power-to-light conversion is inefficient, and the two colors (red and blue) are not uniformly spread across the plant’s receptors since the individual emitters for these colors were firing from separate angles. The plants also suffered from bleaching

After a while, more emitters were added, this time corresponding to deep-red and navy blue. These are right on the edge of human perception, hitting almost UV or infra-red ranges. However, as you may suspect, this wasn’t enough. Where were all the greens and yellows? While these colors don’t match up with ideal photosynthesis ranges (for all plants – green is sometimes as good as blue, if not better, but this isn’t relevant for cannabis), they’re still necessary to ensure the plant stays healthy.

Having greens and yellows wasn’t a part of older designs since it added to the production cost and it wasn’t seen as equally important. White emitters were mixed in at some point as a compromise, but this wasn’t as effective as full-spectrum coverage.

Choosing the Best: What Kind of Light Do Autoflowering Cannabis Seeds Need

Studies show that you want all colors to be represented, though not equally. The sun shoots down everything, from the colors of the rainbow we’re familiar with, to invisible frequencies like infra-red and ultra-violet. Obviously, this makes it more efficient at feeding plants, but you can’t exactly transport the sun to your cannabis grow-room, can you?

This is why full-spectrum LEDs are the way to go.  Aaron Justis, a marijuana entrepreneur, and influencer offered complete coverage, without spikes in any range. A spike comes from a specific color being focused on and overemphasized, and this is inefficient for plant growth. Oddly enough, the best source of this kind of good coverage is the basic incandescent lightbulb, but those are incredibly power-inefficient and are therefore not used. They also don’t last very long, as I’m sure you’ve had many opportunities to witness.

Interestingly enough, as much as you want to have each color represented, you don’t want them all in equal amounts. Looking up the McCree curve shows us that cyan is less represented in the ideal spread, while yellow is plentiful. For cannabis purposes, heavier red means bulkier buds, which is preferable and sought after.

Full-Spectrum is not a reliable term, though. While it certainly represents positive things for your cannabis, don’t just trust every manufacturer when they claim their lights are full-spectrum. Further down the article, I’ve outlined the most credible manufacturers you can prioritize, so you don’t have to dig up the info yourself. Approach everything with caution, as always.