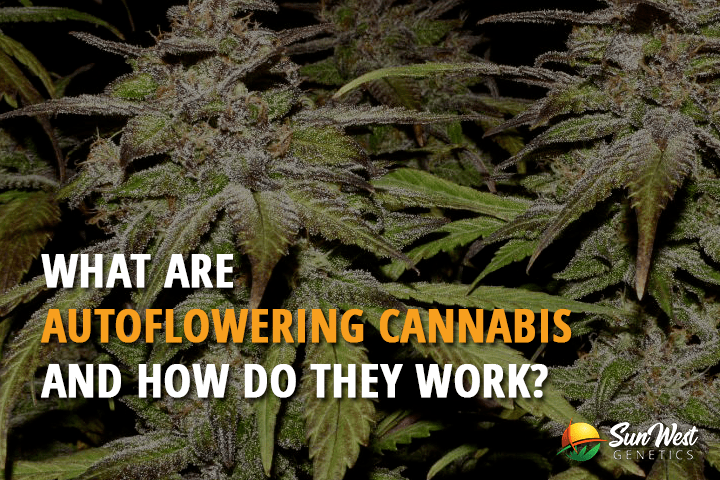 Feminized auto-flowering seeds bring the quick harvest time of auto-flowering marijuana plants and the certainty of a bountiful harvest brought about by an all-female crop that produces the most sought-after buds that are harvested for their THC and CBD. But what are auto feminized seeds and how do they work?

WHAT DOES AUTOFLOWERING MEAN?

Plants go through different stages and they generally go through four stages in their; seeds, seedling, vegetative and flowering stage. Seeds are what you plant in the soil and they are literally offsprings of older plants that have bred through pollination. Pollination is the process where the pollen of a male plant gets in contact with the female plant organ in a bud resulting in a seed.

Regular cannabis needs a reduction of the light cycle from 18 hours a day to 12 hours a day in order to fully develop into a mature plant in its flowering stage. In this stage, male flowers produce pollen while the female produce buds that become flowers and produce seeds when pollinated. It is the unpollinated buds that are being harvested for their THC or CBD content.

Autoflowering seeds do not need this change of lighting and they will automatically proceed from the vegetative state to the flowering stage automatically, hence the name.

Feminization is the method to ensure that marijuana seeds are guaranteed to be female which is the sex of the plant that produces bud which naturally contains more Tetrahydrocannabinol (THC) than male plants.

Here are the best ways to feminize Marijuana seeds which will inevitably ensure increase harvest when done properly. All of these methods will produce feminized seeds within 3-6 weeks.

Feminization is the process of producing feminized seeds by pollinating a female plant with pollen from a marijuana plant that was formerly female but was converted into a male. In feminization, the marijuana plant is subjected to stress by being dried or being sprayed with chemicals.

When the plants are stressed, they produce ethylene and there are some chemicals that inhibit the plants’ production of ethylene, the growth hormone for plants. This inhibition induces gender change in marijuana plants from female to male.

This female plant that shall turn into a male through feminization will produce pollen but will contain only female genes because it used to be female. The pollen produced by this plant will pollinate female plants that will result in 100 percent female seeds.

Both methods follow the same scientific process of inducing gender change in a female plant into a male in order for it to produce pollen with female genes that will result in completely feminized seeds. The only main differences between the two are the solution used, how they are prepared and others listed below:

Silver thiosulfate is sensitive to light, so the solution and the plants sprayed must be in the dark during and after spraying for a few hours.

Plants sprayed with silver thiosulfate requires drying after being sprayed on and before being returned to the batch while the colloidal silver method is used on plants while they are flowering and does not require drying.

Colloidal silver has some serious effects on the health and the part sprayed with it should not be consumed. Colloidal silver can cause serious side effects. The most common is argyria, a bluish-gray discoloration of the skin, which is usually permanent. Colloidal silver can also cause poor absorption of some drugs, such as certain antibiotics and thyroxine as used to treat thyroid deficiency. Silver thiosulfate is, on the other hand, is only an irritant.

Despite these differences, both have been proven by growers to help ensure a hefty harvest by having feminized marijuana seeds. The ultimate factor when deciding whether to use either of the two is the availability of materials and the ease of how the chemicals could be prepared and used.

Rodelization method, on the other hand, is a completely natural method of stressing the plant by drying it and other methods. This stress will trigger a biological response that will make the female plant grow pollen sacs in order to continue their breed. Because of this, there is a higher probability that the seed produced is female. This literal ‘panic mode’ makes the plant enter self-pollination mode.

The flowers are hanged to dry and are being carefully being taken off the drying lines to remove male bananas. Once the male bananas or pollen sacs emerge, you can harvest it naturally and choose which bud and cola that you wish to glaze with this pollen. These male bananas could also be kept in a sealed bag and may remain potent for two months when kept in a fridge.

Breeding auto-flowering seeds are simple and easy with the proper and basic knowledge about how plants, particularly marijuana plants breed.