How To Prevent Your Cannabis Plants From Having Stretchy Stems 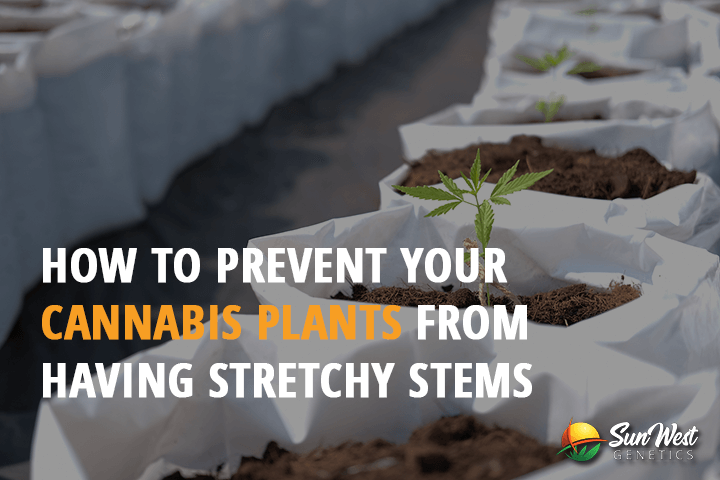 It is very common for indoors and outdoors grown cannabis plants to show stretchy stems. This may not be easily recognized for sometimes it disguises into a slightly large stature of the plant, but the yield will be much noticeable.

Come to think of it; stretched cannabis is far more costly, for it will need a lot of extra energy and effort to tame, which will be tackled in this article.

A cannabis plant that has an elongated and stretched stalk and stems are the torment of any new marijuana breeder. The situation doesn’t provide a stable and firm base for a marijuana plant, for it builds a fragile branch, which leads to influencing the plant during its growth and have the risk of bending over.

But take note of this, the stretchy arm is quite hard to reverse, but most growers would rather replant than to avoid any extra efforts in training. Fortunately, there are many ways to prevent this dilemma, so fully read this cover to give your ideas on taming and fixing before it will cost you more than effort but also when it comes to finances.

When it comes to reasons, there are three major common ones that are known, but unfortunately, it can never be prevented even will all your efforts and knowledge. There are several factors that influence why marijuana plant stretches out, and some of the reasons are:

Understanding the SARP or the Shade Avoidance Response Phenotype, which simply means the plants reaches and stretches to grasp light that is taken by cannabis, in which we called often as competition.

As part of nature’s way, cannabis plants sense a drastic change in the HPS lights; if red lights reduce, then, the competition starts. As for starters, timing and temperature are the vital factors to succeed; that is why the SARP happens.

Lastly, newbie growers must learn to identify that some strains, especially the Sativa races, especially the pure ones, grow tall even with indoor or outdoor environments and not because of the stretching stems.

Ways to Prevent Your Cannabis Plants From Having Stretchy Stems

Now that we have already found out about the reasons, then let’s discuss how we are going to shift the problem and make way to ensure that it will be prevented in one way or another.

Fixes for Stretchy Stems of the Cannabis Plants

There might be situations when the prevention did not work; therefore, you will sort some ways to fix the stretched plant. Now, there are few fixes that can be done guaranteed to work for some.

In fact, some growers would use a stake made out of wood, such as bamboo, or it can be with plastic, then tied up using the tape or tie to make sure that it is sturdy when attached. A little point when using a stake, make sure that the attached stem of the cannabis plant won’t be damaged.

Remember that this is done in order to support a stretching stem and refrain them from growing and not to kill them.

All in all, with the stretchy stems problem, if this can be dealt with right away, there will be no very significant harm or problems that can’t be solved. In fact for some breeders, they use any type of thing that stands as long as it can support a drooping stem because if overstretching until the cannabis plant stem will be stronger enough to handle itself

Remember that, that suggestion might work for other breeders but not exactly in general. So far, a technique that will work best would be to scoop out the marijuana and plant it in another pot or to another hole but much deeper and bigger than the first one, but make sure that the plant itself won’t be harmed especially with the thin roots.

Replanting will be a fresh start for new buds and shoots to grow. Provide a better environment for the reborn marijuana plant, direct sunlight if opting for outdoors, and a great lowered intensity light for indoors.

Indoor lighting can be well provided by using the HID lights, LED, or even a CFL; all these lights are good options but should still be controlled.

The first set of leaves will soon be seen as soon as marijuana fully recovered. By this time, all the growth is more focused on the leaves that are starting to show and not with the stem. Energy is guided to provide chlorophyll, which in turn encourages even more enhanced photosynthesis. Thus, leaving the new plant a great chance of survival