Home » Blog » How to Make Hash from Trimmings of Your Cannabis

How to Make Hash from Trimmings of Your Cannabis 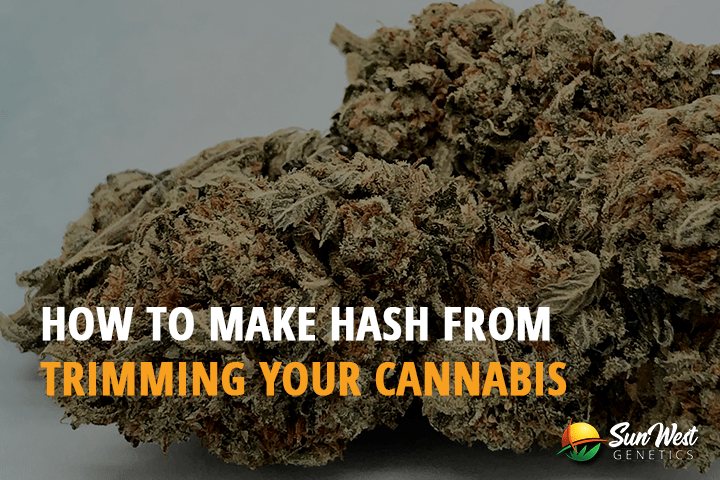 Trimming off some leaves with your cannabis plants is somehow beneficial to clean out your cannabis plants and successively, and how to make hash from trimming improve the growth in order to keep it well-nourished and healthy. However, these trimmings are often unusable and unutilized for human consumption. That is why most of it is just thrown around as compost or to bio-degradable trash bins in order to help in some way the environment by adding organic matter. But then, most marijuana smokers never realize that these leaves could be utilized exclusively as a hash. If you’re quite confused or interested in this, then let this article be your guide in relation to that.

What is a Cannabis Hash?

Often denoted as hashish, this cannabis product is made up of resins. These are compressed resin glands that are basically trichrome for which are commonly denoted as clear and white particles in the marijuana. Like marijuana, this could be smoke out, vaporize, and inhaled through pipes, bongs, vaporize and even could be orally taken directly. As compared to medical marijuana, this reportedly contains more content of Tetrahydrocannabinol (THC), Cannabidiol (CBD), and other important cannabinoids.

Hash has varying characteristics and properties. Similarly to marijuana, hash differs with potency, texture, and even color. Most hash appears black, brown, and reddish. Additionally, it could be hard, brittle, or soft in texture.

Additionally, how to make hash from trimmings has been used by people in cooking as part of ingredients because of its high solubility to fatty materials like butter, cream, or oils.

The Origins of Hash

Most people associates hash emergence in South Asia specifically India, Pakistan, or Afghanistan. In Pakistan, the hash is called ‘Charas’ by people and is used because of its medicinal benefits. There are also records and residues found in the Arabia region regarding its utilization. Well, in fact, the name of this resin comes from an Arabic word which means grass.

By the 1800s, hash has spread towards Europe and has been using by a lot of people because of its potency and medicinal effects. Starting from that period, the continuous expansion of hash goes beyond to America where it was carefully studied and soon banned out because of its narcotic tendencies.

Trimmings not just include leaves but also stems and buds. Trichome is the key component in order to make of how to make hash from trimmings you need to remember that trichome spread around the body of the cannabis plant. But nonetheless, there are a lot of methods that could employ upon making hash. It is up to you on deciding what you will use these methods and for which is convenient for your utilization.

You need to get ready always. Gather out the things that you need when making how to make hash from trimmings. The following materials and tools include;

Gently put the trimmings above the silkscreen and move it carefully around it. You will notice that kief, the resinous trichrome that stick upon your baking paper. Continue sieving until you obtain about one-tenth of the trimmings that you’ve used at the start of the process.

Carefully collect the kief and transfer it to another sheet of baking paper through a credit card. Make sure to arrange it in such a way that it is easier to press down. Using a hash block, compress the kief obtain as needed. To get the hash, store it in a refrigerator at a cool temperature before utilization.

For this method, you will use the following materials that are available in the use of various household items and tools. Respectively, this includes;

Mix out the trimmings, ice, and water into a blender. Make sure to put a lot of ice and water until it covers everything. Shake it until a frothy and thick mixture is obtained.

Filter the mixture into a strainer or silkscreen and put it in a large transparent glass or container. Leave the mixture for 30 minutes and allow it to settle. The particles that settle in the bottom of the glass is relatively the hash.

In order to get the hash, you need to drain about two-thirds of the water inside the jar. Ensure that you will not include the hash that is settled below. Fill again the jar with ice water and then, make the solution settle down. Then, drain it again and repeat the same process until you will disintegrate the hash closest to the upper plant layer.

Any additional water that could be drain should be done. Then filter out the remaining hash mixture through a coffee filter. Seal it carefully and twist it out carefully to eliminate supplementary water on it.

Dry out the cold hash in the coffee filter bag. Store and refrigerate it to restore potency and for further utilization.

A mechanical drum strains out cannabis kief automatically without tiring yourself to silkscreen as needed. You could buy out this mechanical drum for 350 Euros online or to any local stores.

All you need to gather out for this method is the mechanical drum and your trimmed cannabis.

To carry on the machine, just put the trimmings into the drum and turn it on. The drum will spin and get sifted through a silkscreen in order to obtain the kief.

Likewise, compress the kief through a hash block. After then, you could store and refrigerate the hash that you’ve obtained to restore the potency before utilization.

Other Things that You Could do with the Trimmings

Aside from hash, you could create and innovate out things with your trimmings. It includes the following;

-You could use this through your coffee, milkshakes, and smoothies to create a smooth and flavorful cannabis aroma.

-Cannabis flavored cooking oil that will make you energetic and high.