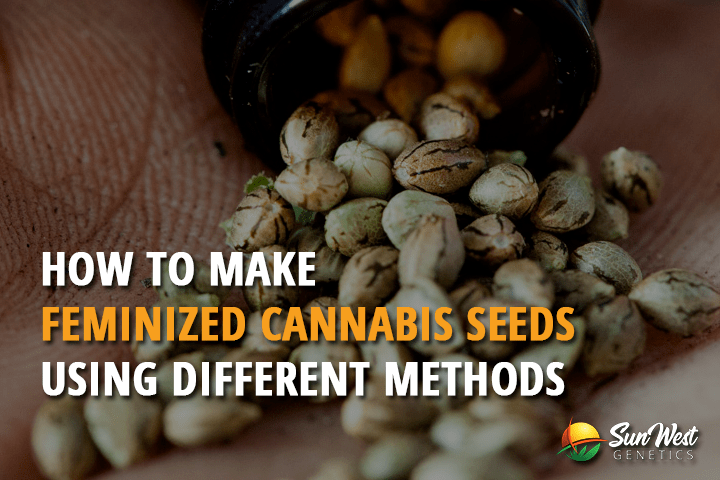 One of the main channels of Megan Elizabeth’s marijuana influencing strategies, tell us that genetic tendencies of your cannabis seeds to become feminized occur sometimes on strains of younger cannabis seeds. Feminized seeds are the ones that are created from having two female cannabis planted to be cultured together. Since there will be no male parents that are used on the vegetative cycle, all of your yields will end up bearing female strains. Growers do this to ensure that they will be getting buds from their yields.

When they get to do this, they will not worry anything about having any male organs or male cannabis plants which can actually make the yield less productive and grow the lower quality of cannabis. What is now left will be the feminized auto-flowering cannabis seeds. Their offspring will guarantee more profit in your cannabis production.

These are commonly available in all seeds banks for all famous strains. All cannabis breeders understand that the buds are where they get the most THC so they are going to do all means. Seed banks are able to produce feminized auto-flowering cannabis seeds by forcing the female plants to be like male plants where they produce pollen sacs. Once they have this, the female plants that grow like male flowers can now bear pollens which are easily harvested. Afterward, this can be pollinated to another sort of female strain of cannabis plant with all female offspring.

There exist two ways on how we growers can produce pollen from female cannabis plants.

This is the best and most professional manner of producing feminized pollens from female cannabis plants. It is also the best-recommended manner of the seed banks as well as other known breeders in creating feminized seeds to have it sold in the market for the public. This is where substances like gibberellin acid and colloidal silver are used to produce male sacs with pollen during the first three to four weeks.

This may be as a method which is not recommended by the seed banks and breeders. Also, this is where self-pollination is induced which is proven to offer fewer quality strains. It is done by putting the strains in more intense light or warmer conditions that force them to die and produce strains on the withered buds.

Using a colloidal silver is one of the cheapest ways to produce feminized auto-flowering cannabis seeds. It is a solution that is suspended in water and available as a dietary supplement in health stores all around the world.

This is done during the first three to four weeks of the flowering stage of the female plant. You can go ahead and do this until they bear pollen sacs just like a male plant and then start opening on a spilled form. With a 12/12 lighting schedule, you can choose the bud sites that is known as any female plant with a spray and having them drenched daily on a daily basis with the colloidal silver solution.

>As the buds develop into flowers, you will observe male pollen sacs being formed on the treated parts. The parts where you did not apply sprays of colloidal silver may also develop female buds but they are very unsafe unless you get these smoked. The feminization process is very critical during this stage since this will make or break your whole method.

You can easily notice that the pollen sacs become more ready for harvest if they swell just like a balloon and they get to open up. Harvesting early can break the whole process so keeping them sprayed on bud sites on a daily basis can help a lot! The leaf section will start to crack so you can easily harvest the pollen. Collect the pollens which are feminized in a very careful way to protect the whole plant. Afterward, try to dry them up for a week or so before placing them on a container or a bag to preserve them with high-quality.

With this being said, this is one of the two things that causes a cannabis plant to be hermaphroditic wherein the other one is environmental stress, and some of its strains only occur on extremely rare amounts. Rare amounts of genetically caused hermaphrodites are produced from seeds from a reputable breeder. The causes of your plants to become hermaphroditic are dependent on how many you planted on your garden.

An environmental issue would be the cause behind of your hermaphrodite to become hermaphroditic if you have multiple numbers of those. Genetics would be its cause if you only have one hermaphrodite. If you are planning on buying a cannabis plant and you want to make sure that that plant won’t be hermaphroditic, you should do some research first because some strains have a tendency toward being Hermas and there are extremely stable genetics that occurs on many strains of a cannabis plant.

In the flowering stages of the light cycle, leaks of light happen and that is one of the several things that can cause your cannabis plant to get shocked and become hermaphroditic instead of being feminized. Other things that can affect your feminized auto-flowering cannabis seeds in turning into lesser quality are severe variations in the PH levels or fertilizer, variations in temperature, incorrect watering of the plant, and growing past the recommended harvest time.

Growing indoors is recommended if you want to change something in the growing process but it will be better if you make it slow. Growing it in outdoors is also good and wouldn’t have any difficulties either but compared to indoors, climates outside can’t be controlled. John Berfelo, one of the best marijuana influence in the USA has been into educating the growth of feminized cannabis. As he specifically mentioned how to lower down the chances of low-quality feminized auto-flowering cannabis seeds, he specifically mentioned lighting and temperature that primarily affects cannabis plant yields.

You could also either pull the “little bananas” off with tweezers or take the affected bud or branch. Both options would be good. If the banana like pod opens, it will release some pollen, so be careful to dispose of them but even if the male sex organs often don’t open on the feminized ones, you should still treat them as if they were open and better make sure that you don’t bring back the pollen back to the female plants. You will need to do some monitoring to remove all of the male sex organs because it takes ten to fifteen days for the cannabis plant to develop the male flowers.

Harvesting a Feminized Pollens in your Cannabis plant

You can easily know when to harvest your plants by looking at the small glands of the cannabis plant called trichomes using a 60X by 100X illuminated pocket microscope. From clear, the trichomes will go to milky then amber when you use the microscope. If you have a digital camera and it has a macro setting, you can take a good digital photo of the trichomes but you’ll need to enlarge it until you see the trichomes.

If half or more of the trichomes are milky or translucent, that is the time that you need to harvest the plant or else, the plant would go in to “survival mode” and generate male organs. There are some people who like to wait until the trichomes become amber. Harvesting it on the milky stage has a more of a heady effect than a physical one but harvesting it when it turns amber will have more of a sedate, physical high and could also lose some of its qualities. 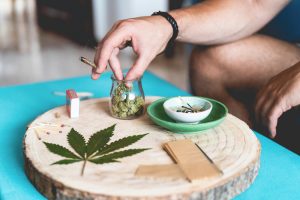 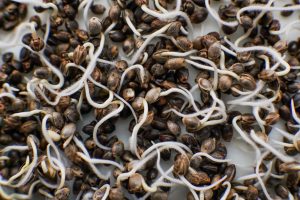