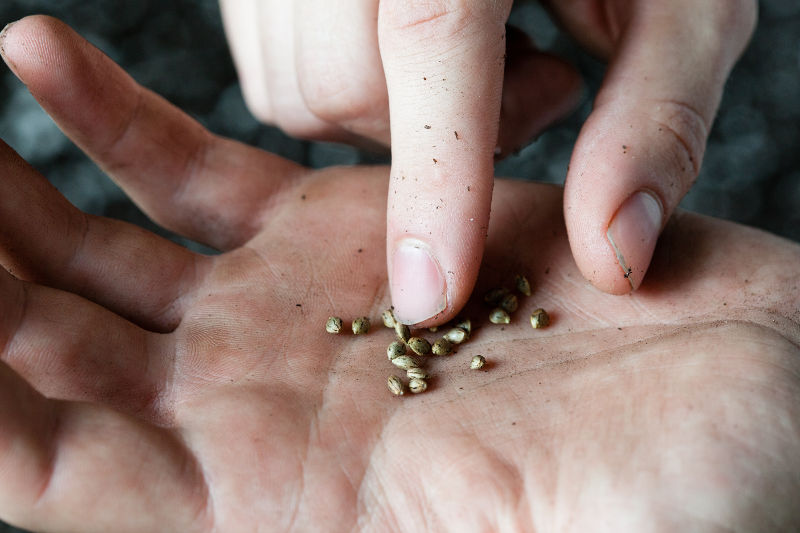 The answer to this question is very simple. How much weed can you grow with one seed? One. One seed grows only one marijuana plant. However, your motto should always be “the more the merrier”. If you only grow one marijuana seed in order to produce just one marijuana plant, you are risking the possibility that the plant could be a male one. And as we all know, only female marijuana plants produce buds and therefore are the only ones that you can harvest weed from.

In order to make sure that you get at least a few females, you should choose to plant at least 5 or 6 good seeds. And to avoid pollination, what you should do is separate the males from the females in the early pre-flowering stage. You could usually already tell which ones are males and which ones are females by looking for some signs. You could also do this by putting a black bag over one part of each plant to induce early flowering. And if you see which seeds have produced buds, you would know that these are the female ones.

However, some experts advise that at first, you should keep at least one male marijuana plant together with a female one. This will result in the males transferring their pollen to the female plant and result in pollination. With only one male and female plant for this process, you are guaranteed at least a handful of seeds that you could use to plant your next batch of marijuana plants. Then when you start your new cycle, you could do the same thing with the pollination again to make sure that you won’t run out of seeds anytime soon.

Also, if you’ve got some extra seeds, you have to make sure that you store them properly so you won’t need to buy marijuana seeds again and again. The most common instruction and easiest one to follow when talking about storing marijuana seeds are that you need to store them in a cool and dry place. If you have a cool and dark cupboard where you are sure it won’t be reached by pests and bugs then it is a good place to store your seeds in. Make sure to place your seeds in an airtight container such as a Ziploc bag. You could even use a vacuum sealer to make sure that your seeds are exposed to the least amount of air and moisture as possible. And if you have access to them, you could choose to put in desiccants such as silica gel as well.