Home » Blog » How Does Weather Affect Your Marijuana Autoflower Plants

How Does Weather Affect Your Marijuana Autoflower Plants 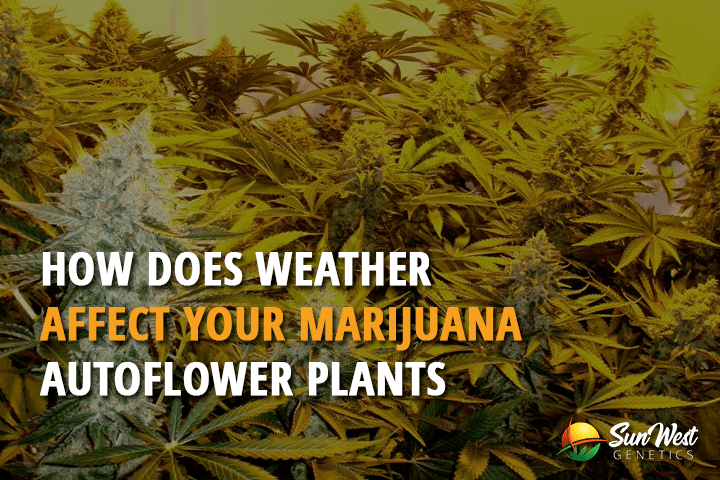 Marijuana Seeds Autoflower in All Odds

Autoflower plants have enhanced temperature endurance, and they can grow in any circumstances. Marijuana seeds autoflowers are impressively sturdy, but it is still better to keep the surroundings within the typical temperature scale if possible. In accordance to the study of Robert Bergman, autoflower plants grow best in temperatures with a scope of 24 C to 30 C. But when the temperature goes below 10C, then they cause to reduce crops considerably, or even die.

Autoflowering Cannabis naturally can resist severe weather and are more insect resistant, meaning that there is little to no problems with mold, fungi, pest infestations, cold and even frost. Furthermore, these crops are firm and able to grow in all sorts of situations.

Although you can’t always avoid bad weather, it is still better to have precautionary measures to avert your plants from getting damaged. You’ll be very observant and take note of the significant symptoms on how the weather affects your plant, and provide them in the future so these weather extremes can’t get you by shock.

Good: The only advantage of cold temperature is its impulse to inhibit pests.

Bad: Cold temperatures naturally make things to slow down. Due to the slowed growth, your plants won’t produce yields that are as bulky as standard.

Good: You can increase the harvest all year without suffering about fungi decaying the product when there’s heat. The plants also favor from the light of the sun, which prompts optimal flower production.

Bad: The heat can be just as troublesome as cold and might have unfavorable results on your marijuana plants. Leaves with curling or burnt appearances will show the earliest symptoms of plants that are overheating.

Indoor plants with grow lights that are making the heat to be too high, then during the flowering period, buds that are closest to the light will be whitened and strained out. Other signs include yellowing, brown specks, and wilting or drooping leaves. Plants that aren’t getting sufficient water have a higher risk of dying to heat stress.

Intense heat is fatal to marijuana roots, particularly in growing weeds. In addition, the faster evaporation rate may result in severe and cracked soil. Left unchecked can burn the roots and damage the plants.

Bad: Massive winds can create significant amounts of stress on your plant, hindering its growth. And it is not an exaggeration, for ampere-hours of strong wind blows serve to destroy your marijuana plant’s branches and leaves, and restoring them won’t be simple.

Bad: Storms are another of the enormous warnings a grower must endure. Especially in April – June, no one suspects them though they can come out of nowhere and ruin your marijuana plant’s branches and leaves. The most critical time for such unexpected rain to arrive is during the flowering.

At that stage, the flowers develop, beginning to produce big shoots some weeks later. A sudden storm might not just split the branches by the water’s pressure but also cause even more severe condensation problems, which are commonly tricky to solve without chopping off your plants.

Bad: Freezes are another climate phenomenon that can be quite dangerous to autoflowering marijuana, particularly in continental environments or mountain regions. Low temperatures and high ambient humidity change the yields from the roots to the leaves.

Humidity normally appears with undesired insects and fungi altering the marijuana plants into breeding place. In the case of mold, this is caused by the Botrytis fungus and makes marijuana entirely unusable. Some pests also fancy humid surroundings to calm down, for illustration, the larvae of the fungus, which feed upon the little leaf filament, causing the plant inadequate of consuming fertilizers and inclined to infections.

Bad: Continued drought seasons without any rain also create grave dilemmas too; not only heat and cold can cripple your autoflowering marijuana yields. Some producers only water the plants when reaping season approaches, but you should be mindful there because the plants might decay and end up burned by sunlight.

For typical weather, it is best to know which strains are suitable for such a climate. If you are in a place that usually has cold temperatures, prefer a strain that has the endurance for chilling temperatures. If it is in a windy region, picked strains that produce thick and strong.

Still, in severe weather, it’s probably to produce a prosperous autoflowering marijuana yield. All it takes is awareness and tolerance since there are many approaches for sustaining a healthy ecosystem for your plants.

So, before starting your autoflowering marijuana outside the most crucial information is to identify your place’s atmosphere and to determine a suitable site for your products: is it warm weather? Preferably a cold one? Which country gives greater shelter from the wind? What nighttime colds are to be anticipated? These inquiries encourage you to delimit possible obstacles of the area you start on in advance.