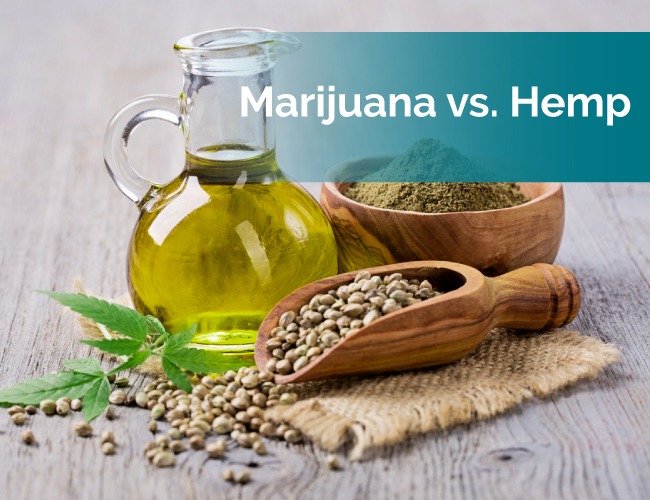 Generally speaking, Hemp and Marijuana are the same, they both belong in the Cannabis world. However, the two have also differences which led to some growers asking whether they are just the same or not. To fully understand the concept, let us talk about the different points of differences between hemp and Marijuana.

Just like the genetic differences of cannabis sativa and cannabis indica, hemp and marijuana have also genetic differences. Accordingly, even in the early times of farming history, cultivation of Cannabis plants have already existed for industrial and medical use. Strong and tall Marijuana plants are being cultivated by the early civilization for food, oil and textile purposes. These plants (marijuana plants) were bred with other plants having the same character, and starting on the birth of hemp has come.

The Marijuana plants are containing a compound called cannabinoids. A recent research result showed that there are 60 different cannabinoids; however, it is the THC which gains more fame. THC is the main reason why Marijuana will cause “high” effect to the human body.

Since they have different content and effects, they are also cultivated differently since they require different cultivation methods. Medical Marijuana tends to produce female flowers which produce more buds while Hemps do not produce buds because they are commonly male in gender. To achieve a high level of THC content, Marijuana growers grew their plants meticulously by providing all its needs like water, humidity, temperature, CO2, enough oxygen and other needs. Hemp is commonly grown outdoors because they are tall and will not require close attention to its growers.

While the people are already aware of the uses of Marijuana plants, today, let’s focus on the uses of Hemps for any purpose.

Talking about Hemp will give you a wide idea of uses. It has bigger value in the whole industry since it can be used as apparel and accessories. It can also be added as a diet medium, an ingredient for cosmetic productions and etc. Hemps can be used in making wax, cloth paper, resin and many other things.

One of the biggest reasons why Hemps are widely cultivated is the fact that it can produce a good quality of paper because of its great length of fiber and strength. In the past history, Hemps and flax are the two major materials for paper production. When the age of chemical pulping came, the wood-based paper productions were born.  As of today, 95% of the paper in the world is produced from wood materials.

Using hemp as a raw material for paper production has a big advantage over using the wood. With Hemps, fewer chemicals will be used for the production process and as a result, there will be less chlorinated organic compound by-products in hemp paper production. This compound includes chloroform and dioxins and other types of the said compound.

The industry of food production with the use of Hemps is now increasing dramatically. This is maybe because Hemps are actually nutritious plants, which have many health benefits. Hemp naturally contains essential amino and fatty acids which make it effective in lowering cholesterol and blood pressure, stimulate weight loss, helps to improve the immune system, and can even reduce some sorts of inflammations. That is maybe the reason why as of today, there are 25, 000 products made from Hemp are made.

When talking about protein, Hemps are second with highest of protein content. This high protein content can be found in Hemp seeds and can be eaten as a whole, can be pressed to produce oil or flour for baking purposes. In other countries, there are certain products like hemp spreads, hemp meal, Hemp oil and Hemp seed energy bars which are obviously made from Hemp’s seeds.

Hemp for the human’s health and body

Hemp has big help in maintaining the health of the body. Hemp has also linoleic acid, GLA or gamma linoleic acid, omega 3, 6 and 9 and etc. Because of that big benefit from Hemps, there are body care foundations that are introduced in the market in which Hemps is one of the active ingredients.  In addition to that, Hemps are also known to be effective in treating eczema and other skin cancer disorders.

In general, Marijuana and Hemps are both the same and came from the same plants, they just differ from parts. Although these terms are sometimes used for the same meaning of terminology they have different connotations.