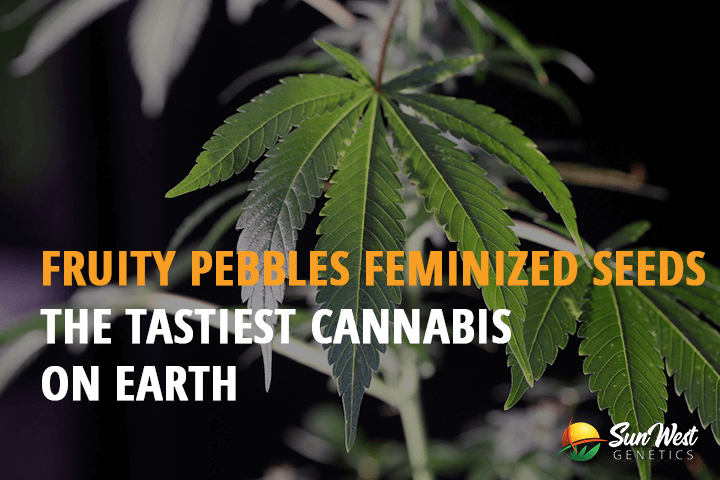 There are plenty of different marijuana strains on the planet. There are about at least 800known strains on earth and the number might even reach a thousand if you count strains that are not as mainstream as the ones we know about. However, no matter how many strains are in existence, there are not a lot of strains that can stand up to Fruity Pebbles feminized seeds when it comes to growing into ridiculously tasty marijuana plants.

Yes, that is right. There are certain strains that are actually known for and highly sought-after by different groups of marijuana enthusiasts all over the world just for their taste. That is because smoking a plant like marijuana is not supposed to be a delicious experience if you only consider strains that have the classic cannabis taste that is earthy, pungent and sort of skunky.

However, many generations of crossbreeding have actually developed a strain such as Fruity Pebbles, which is ranked as one of the best in terms of overall flavor in the entire marijuana industry. So if you want to know more about the strain which many would consider the tastiest in all of existence, here are some things you might find interesting:

What is Fruity Pebbles Feminized?

Fruity Pebbles is a strain that resulted from the crossbreeding of three different cannabis strains: the Green Ribbon hybrid, Tahoe Alien, and the world-famous Granddaddy Purple. Because of those genetics, Fruity Pebbles got a really fruity and sweet kind of taste profile that helped make it one of the most sought-after strains in the entire world.

Because it is the result of a combination of three different strains, Fruity Pebbles ultimately became a very well-balanced strain and has a genetic makeup that is almost equal. It is about 55% indica and 45% sativa. As such, it has balanced effects and attributes that belong to both indica and sativa.

Fruity Pebbles’ main selling point is its taste. Since there are not a lot of delicious marijuana strains, Fruity Pebbles became a very rare treat. There are even rumors that there was a time that a bag of seeds of this strain cost around $1,500. Even its buds are just as expensive or even more expensive than its seeds. And if you consider the fact that these are feminized variants, they might have an even heftier price tag.

As mentioned, the main selling point of Fruity Pebbles is its aroma and flavor profile because of how it is regarded as one of the most delicious strains to have ever existed.

When it comes to its scent, Fruity Pebbles explodes with an intense aroma that certainly explodes the moment you introduce it to the room. It is so aromatic that it seemed as if you opened a box of fruity cereal when you smoke a bud of this strain. And even when wrapped, it still is very difficult to contain the pungently sweet aroma that emanates from Fruity Pebbles. That said, its juicy fragrance is enough to make your mouth water with the thought of fresh tropical and wild fruits touching your tongue.

The taste is just as great and divine as its fragrance. The moment you smoke Fruity Pebbles, your entire mouth will be greeted by a dance of fruity sweetness that is so sugary and tropical that you will never be able to contain your delight. Even the after-taste is just as great as this strain leaves your mouth with the freshness of citrus fruits.

Given that kind of a fragrance and aroma profile, one can really understand why Fruity Pebbles is such an expensive treat that not everyone in the cannabis community will be able to afford and enjoy.

If you think that this strain is simply all about flavor, then you are dead wrong. Taste is not the only thing that defines Fruity Pebbles and it is not the only reason why this is such an expensive and highly sought-after strain.

Fruity Pebbles is a very potent strain that more than gives justice to its THC levels that are as high as 21%. In fact, it is even so strong and potent that it acts like it has THC concentrations that are north of 30%. Given that, this delicious strain surely is not something you should overuse and it might not even be for beginners despite how tasty and tempting it is.

Because it is a well-balanced strain, Fruity Pebbles has effects that hit both your mind and your body. It first manifests itself in the mind by helping you clear your mind of any hazy and stressful thoughts. This heady high is a mellow type of buzz that is not as potent as the high you get from conventional sativas. And if you take this strain at higher doses (which is more than likely because of how tasty it is), you can even expect yourself to hallucinate and to experience a spacey kind of sensation.

The body high will ultimately affect you and will begin to make you feel relaxed but not very lethargic. This goes well with its spacey kind of high as both your mind and your body will be able to indulge and enjoy the trippy experience better. Your entire being will feel like it is floating in an entire dimension especially if you overindulge yourself in this very tasty treat.

Though it might certainly be difficult and downright expensive to get your hands on some Fruity Pebbles seeds, it still does not hurt to know more about how to grow this strain so that you will not be wasting your seeds if ever you do indeed get your hands on them.

Fruity Pebbles is a rather easy strain to grow and rightfully so because of its insanely high price tag. Because of its hybrid genetics, it is very resistant to a lot of adverse conditions that might affect its growth health. It can resist diseases, molds, and cold weather really well. That means that you do not always have to maintain this strain as it simply takes care of itself.

When it comes to height, Fruity Pebbles can grow into enormous plants. That means that you have to grow them in an outdoor space that has enough room for this plant to flourish. And since it grows rather tall, it needs plenty of sunlight and best performs in a climate that has a lot of sunlight and is quite dry and warm. Southern California might come into mind.