How To Properly Consume The Different Kinds of Marijuana Concentrates 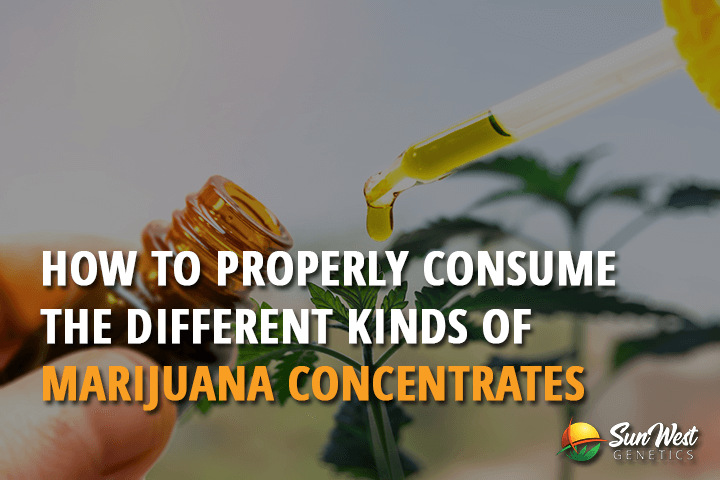 The wonder of modern technology is that they apply to marijuana worldwide as well in cultivation and the preparation of different cannabis-based products. One of such cannabis-based products is the marijuana concentrates. Marijuana concentrates is the oil or wax that are extracted from marijuana. Virtually every kind of marijuana plant could have its oil extracted from its buds that will be very potent and could be used for many different applications.

WHAT ARE MARIJUANA CONCENTRATES?

Marijuana concentrates appear in many different forms but they appear in either wax or oil form but come in different names depending upon the method of preparation. Purging is the process of creating CBD wax and will result in a different type of wax according to the method that involves heat and pressure levels. Purging is the crystallization process of nucleated marijuana fat lipids. Essentially, every other name such as “CBD Wax”, “CBD Dab”, and “CBD Crumble” or “CBD Shatter” through which CBD wax products are labeled are all just different types of CBD wax produced through different methods.

Shatter is a type of wax that was extracted up to the point of nearing crystallization. It looks cloudy and has the texture of glass, hence the name.

Live resin is one of the more expensive, high-end CBD wax types because it uses cryogenically frozen buds instead of dried buds used in other purging processes.

Budder is almost the same as shatter in the process but is more like butter in consistency.

Crumble wax is very similar to Budder but manufacturers pre-purge their CBD oil. This makes it a bit moist. This is more difficult to use due to its consistency but excels largely in the flavor.

CBD wax is just as widely available as CBD oil. CBD wax naturally forms as CBD extracts solidify as a wax. This wax is no different from candles, crayons and other wax products in its physical characteristics of being slippery and oily.

As far as the general application or consumption, oil is more versatile in being added as an ingredient to almost all kinds of food and could also be inhaled whereas wax has to be inhaled only. You cannot dab marijuana buds or seeds. Buds could only be smoked using a joint that is much like a cigarette while seeds need to be consumed or have its oil extracted.

There are different ways to consume marijuana concentrates.

You can smoke oil or wax that is sandwiched within a roll of joint paper that is made of natural paper from rice and other organic materials. This is just the same experience as smoking marijuana buds in a joint.

Dabbing is usually done with oil or wax using a dab rig. A dab rig is a device that is usually made of glass that has a coil in it where you inhale marijuana vapor at the end of it. Once you got your dab rig ready, heat the part that is called a nail by using a lighted blow torch. Once the nail is hot enough, you must then put wax or oil on the nail which is usually made up of ceramic or titanium and replace the glass dome over it. The oil or wax will immediately vaporize and potent marijuana vapors could be inhaled using the end part.

There are electronic dab rigs that are also called as e-nails which are safer and more convenient to use than a regular glass dab rig. Dabbing is considered as an advanced way of smoking marijuana using highly potent cannabis concentrates such as oil and wax in their many different varieties. Dabbing is recommended for those who require to inhale higher dosage and require quicker effects.

Vaping also uses oil and wax which are put inside a device that is very much the same as an e-cigarette. There are also vape pens that also use marijuana concentrates they call as vape juice.

Oil could be made into tinctures which are applied sublingually or under the tongue by using medicinal droppers. This method ensures that marijuana easily gets absorbed by the body for quicker effect in about 20 minutes. Using marijuana oil sublingually has a faster effect than ingested marijuana oil because it gets absorbed into the bloodstream more directly than in being eaten or drunk.

CBD oil could be infused with much different food and drink for consumption. CBD oil may be infused with cookies, bread or even beer. Edibles may have a different effect on people as the CBD go through many different processes in the body before it gets absorbed leading to some delayed effect in some people depending on their metabolism and other factors. CBD oil gel capsules are also available.

Once ingested, CBD-infused food or capsule must go first through the gastro-intestinal tract and then through the liver where it is absorbed. This delayed effect of CBD may still be potent and is even more potent for THC because THC gets converted in the liver into a more potent form of THC.

The good thing about CBD-infused food is that you could prepare it even at home by adding CBD oil to any food you like. Infusion to food is also the best way to administer marijuana to children who need the therapeutic effects of marijuana but may not have the ability to smoke a joint or dab.

One of the things to remember before consuming marijuana concentrates especially for smoking is that they tend to be more expensive than dried buds. This is because it usually takes more buds to get a fair amount for oil or wax from marijuana.

Drinking marijuana oil directly is never recommended as a few drops are potent enough to be infused with food or be smoked so drinking will give you too many drops of oil that may take your body longer to recover from.