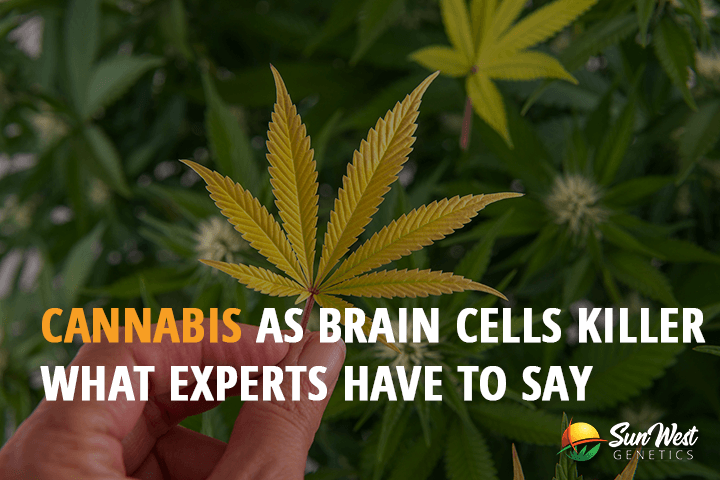 Despite the legalization that has been celebrated by many cannabis enthusiasts, marijuana is a drug that is still hotly debated by people all over the world. For a very long time, the use of recreational cannabis is seen as taboo, as it was illegal all throughout the world. But in recent years, there have been undeniable changes in how people see marijuana and appreciating its medical uses. As benefits are identified, there are also potential risks and side effects that come with constant use.

In this article, we answer the question: What is the relationship between cannabis and the brain? Does marijuana use kill brain cells?

In 2012, a study by M. H. Meier et al. from New Zealand had evaluated the relationship between a person’s cognitive ability and marijuana use. This research involved more than a thousand individuals over 38 years.

The researchers have discovered a distinct association between the two, and these are the results.
People who use cannabis heavily during their adolescence until adulthood has lost an average of 6 to 8 IQ points by the time they reach middle age.

Among the research respondents, even if the people stopped using cannabis in their later life, they will not be able to regain the IQ points that they have lost. Additionally, people who started to use cannabis later in their life did not experience any form of IQ loss.

This study had given a significant impact on cannabis research because of the following reasons:

This research involved a revolutionary large and long-term scope which has given a better assessment of cognitive functions and their relationship to cannabis use. The results of this study have concluded that cannabis use during adolescence entails irreversible harm against the brain development of adolescents. But, of course, like other research studies, this also comes with limitations. According to many researchers, it is impossible to conclude that cannabis use can cause lower intelligence based on a single study alone.

Responses to The IQ Study

In a 2013 article published by the National Academy of Sciences, conclusions suggest that IQ decline can also be affected by personality factors and not just marijuana use alone. The article author cited conscientiousness as an example. Low conscientiousness might explain both drug use and poor cognitive test results.

In another article published in 2016, researchers have found that genetic factors can also contribute to cognitive decline. In this specific study, the author compared the IQ level changes between twins who used cannabis and their siblings who are abstinent in taking marijuana. The results show no significant differences in the IQ decline between twins.

Clearly, we can see that there is a lot of research that still needs to be done to understand cannabis effect on intelligence in the long run.

In 2015 review in PubMed Central has concluded that adolescent cannabis use can be associated with potentially permanent attention problems and memory deficits, which are structural brain changes and abnormal functioning of the neurons.

In a 2017 study published in PubMed Central, it was reported that heavy marijuana use over 18 months could lead to a decline in IQ levels and numerous cognitive functions. This says that adolescent marijuana use is also associated with the development of substance use and relevant mental health disorders. These, in return, can trigger additional changes in the brain.

In another study by B. Chadwick and M. H. Miller in 2013, cannabis use is also associated with higher chances of mental health concerns, including schizophrenia and clinical depression.

In a study done by the National Academies of Science, Engineering, and Medicine in 2017, there is moderate evidence that using cannabis as an adolescent is a major risk factor in the development of problems in cannabis use later in life.

In a 2013 study conducted by Battala et al., long-term cannabis use may alter the brain structure and function among adults.

In a different review published in The Japanese Society of Psychiatry and Neurology in 2013, it has been found that across 14 studies, cannabis users generally have a smaller hippocampus compared to others who have not used cannabis. The researchers concluded that chronic and long-term marijuana usage might be related to deaths of brain cells in the hippocampus, which the area of the brain that holds memory.

Heavy marijuana users have a tendency to perform worse on tests regarding neuropsychological functions compared to non-users. This is from a study published in JAMA Psychiatry in 2016.
In conflict with the former study, a 2015 review in the Journal of Neuroscience states that there are no significant differences between the brain shape and volume of daily cannabis users and those who have never used the drug.

In a longitudinal study done 25 years ago, this assessed cannabis use and cognitive function in 3,385 participants. The authors of this study have found that current users of marijuana perform worse on verbal memory and processing speed tests. Also, the cumulative exposure of people to cannabis is very much associated with failing or performing poorly on verbal memory examinations. On the other hand, cumulative exposure to cannabis did not appear to have an effect on the processing speed or executive function.

In terms of cannabis use effects on frequent long-term usage, the research on this matter is still ongoing. At present, we know that long-term cannabis usage is associated with an increased risk of disorders regarding substance usage.

Additionally, long-term marijuana use may affect concentration, memory, and IQ levels. There is also a possibility that it can affect important executive functions, like critical thinking, decision making, and problem-solving.

These long-term effects have been linked to being more pronounced among people who start using cannabis at a young age and frequently use these over time.

In a study, the distribution of the receptors in the rat brain has been observed. A brain scan on a rat’s brain reveals high levels of cannabinoid receptors in many areas, including the nucleus accumbens, ventral striatum, hippocampus, cerebellum, and cortex.

Memory impairment from cannabis use occurs because THC alters how the hippocampus processes the information. But, something that you should take note supporting the assertion coming from animal studies.

For instance, rats that are exposed to THC in utero, after birth, or during adolescence, show problems with learning and memory tasks later in life. Moreover, cognitive impairment in adult rats is associated with functional and structural changes in the hippocampus from THC exposure during adolescence.

And as people age, they lose their neurons in the hippocampus, which decreases their ability to learn important information. Constant and chronic THC exposure may hasten age-related loss of hippocampal neurons.

In one study, rats exposed to THC every day for 8 months, which is approximately 30 percent of their lifespan. It showed a level of nerve cell loss at 11 to 12 months of age that equals those of unexposed animals that are twice their age.

Getting High Does Not Equal Killing Brain Cells

According to Dr. Ajeet Sodhi, a neurologist based in California, long-term cannabis use is suspected of causing memory problems, tolerance, lack of motivation, paranoia, and disorders such as schizophrenia. At this point in time, he says there simply are not enough studies that offer a definitive answer on whether or not long-term cannabis use can affect the brain.

Getting high is not synonymous with killing brain cells. The high it can give produces an altered state of mind as produced by THC, which is a mild hallucinogen. Neither cannabis and its THC component can kill brain cells in the traditional sense, so there is no need to quantify brain damage.

A Summary On Cannabis Use Effects on Brain Cells

Humans cannot conclude at present whether or not cannabis changes the structure of the brain and its functions.

There might be pre-existing differences that make there are people more likely to use cannabis in using the herb in the first place without any further effects on actual cannabis use.
However, using cannabis when a person is too young, using cannabis frequently, and increasing cannabis dosages are associated with poor cognitive outcomes.
There are a few studies that investigate the differences in the cognitive effects of ingesting, vaping, or smoking cannabis.

There is still a lot of things that we do not know about how cannabis use affects the brain over short and long term periods. Long term and frequent marijuana use equate high chances of cognitive functions, such as attention, learning, and memory, but there is a lot of research that needs to be done.