Home » Blog » Cannabis Seeds vs Clones: What are the Difference?

Cannabis Seeds vs Clones: What are the Difference? 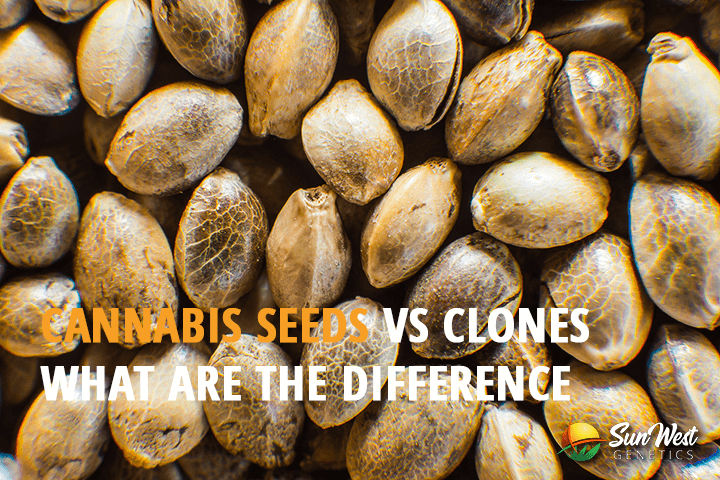 As a first time grower, there are still a lot of questions we had in our minds. We’ve been thinking about what strains to choose, where to plant, or what to expect when cultivating cannabis plants.

However, way before those things, you should have been able to decide what type of cultivation you’ll employ. Is it from seeds or clones? Though, most often growers used seeds to start planting cannabis. It’s still best to know things about clones. They’re rarely done yet most efficient to some of the expert growers.

For more information, this article we’ll help you decide what would be most convenient for your situation with planting cannabis.

Using seeds is the most natural way to grow cannabis plants. It’s the traditional method used in planting which profoundly existed as the earth began to deliver life. Its most often used for growing different plants including fruits, flowers, herbs, and vegetables.

However, since cannabis is a dioecious species, it’s important to realize that both male and female plant possesses different physical and even chemical characteristics. Female cannabis plants are most desirable for its ‘bud producing’ attribute as compared to male plants which do not hold such quality.

To decrease the chances of getting a male plant, seeds are usually genetically enhanced to ensure that female plants will be grown. These type of seeds are known as ‘feminized seeds’.

Other types of seed mostly advertised in seed banks are auto-flowering seeds. Specifically, this kind of seeds is small-statured and short flowering period plants bred from ruderalis and sativa or indica genetics.

Auto-flowering seeds are mostly intended for beginner growers and those who want to keep discreet cultivation.

Why you should grow using cannabis seeds?

Since cannabis seeds have a taproot, rest assured that your plants will grow vigorously. Thus, you don’t need much monitoring or nutrient allowance. You just have to do what’s necessary on growing cannabis plants. It provides more support into the plants.

Nevertheless, it should be from a reliable seed bank delivering high-quality cannabis genetics. Or else, you’ll get unhealthy and incapable cannabis plants.

Seeds could be bought online, dispensaries, or to any cannabis stores. Though, this will vary depending on an area or country’s perception with cannabis. As expected, you’ll be able to easily access seeds in places where cannabis is legally available. However, you can ship cannabis anywhere in the world.

Unlike clones, seeds aren’t exposed that much to pests and diseases. It’s mostly viable and clean if kept treated and stored in a proper place. Just avoid buying bad seeds and you’ll easily grow cannabis plants through seeds.

A healthy cannabis seed usually has a dark brown or light gray color. Tiger striping is quite common to some strains. Immature or spoiled seeds won’t do any good with growing.

Why you SHOULD NOT grow using cannabis seeds?

Don’t expect that when your growing cannabis seeds things will go lightly. Of course, there are still chances that these seeds won’t grow definitely. Proper care and monitoring are still important during this phase.

Also, it’s important to choose high-quality cannabis seeds. Old and improperly stored seeds will not grow well no matter how much nutrients you’ll pour into it. It’s best to examine the seeds first before taking any step on planting.

Takes A Lot of Time

As compared to cloning where plants are already ‘mature’, it will take you quite more time to grow using cannabis seeds. Thus, clones will have a one to two-week advance start when planting cannabis.

However, it’s all worth the wait and shot. It is like watching your baby grow through time.

An exception to feminized seeds, the regular ones are quite a hassle most especially if you’re only looking to cultivate female cannabis plants. Nonetheless, you can’t readily identify the gender of the plant until the pre-flowering stage.

That is why you’ll have to put risks on planting regular seeds. You’ll waste your time and effort once discovered that your plants are mostly male.

Thus, most growers tend to cultivate cannabis plants through the use of feminized seeds.

It depends otherwise. If your planning to breed it by yourself, then it will definitely save a lot of money buying on seeds. However, if you’ll purchase seeds, then it’s important to make sure that you won’t purchase a rare strain as its mostly very expensive. Apart from that, additional costs including taxes and shipping could arise depending on wherever you are.

Cloning is a technique employed in various plant species to reproduce an offspring without taking the traditional seed route. Basically, it’s done through cutting a portion from the mature cannabis plant (parent) and replant it to produce buds.

However, it may as easy as you could tell it, but this process is hassling requiring sufficient knowledge and skills on cloning.

Since clones from the start are rootless, you’ll have to take care of it the most in order to get stabilized its root system. If given the most care, it would get at least one to two weeks before any roots will appear. At this point, the cloned plant will be able to stand alone like a regular cannabis plant.

Why you SHOULD grow cannabis clones?

There are few reasons why a lot of growers prefer to cultivate clones rather than seeds. Here are some of the reasons;

Clones are an exact copy of the mother plant. Thus, you’ll be able to get a clear assurance that all the genetic traits with the mother will be retained from its offspring. If it’s feminized, then a clear female plant will be getting from this one.

Moreover, not just sex but its quality, potency, and stature will be inherited. Of course, not just its genetic composition will dictate its growth. It’s important to take an effort on giving the best nutrients, light, and treatment for it to reach its maximum growing condition.

As compared to seeds, you’ll take the most advantage as clones are already mature when you start planting it. However, clones have a shorter vegetative period as compared to any seeds. Thus, you’ll be able to easily harvest these type of plants as needed.

Why you SHOULD NOT grow cannabis clones?

There are multiple reasons why cannabis clones should not be cultivated. It includes the following;

Clones tend to be easily get exposed by pathogens including bacteria and pests. Its quite sensitive designed with extreme care, maintenance, and effort. It’s typically pickier as compared to plants coming from seeds.

Though cloning could be done by yourself, buying cannabis clones is quite difficult. As seeds are prominently sold in the cannabis stores and dispensaries, clones are rarely bought by cannabis growers.

However, if you plan on growing through cloning, its best to do things all by yourself.

As compared to growing through cannabis seeds, cloning seems to be less efficient. Since you’ll be cultivating on a readily established plant with a vulnerable root system, clones yield much fewer buds as compared to cannabis seeds.

Deciding what to use between cannabis seeds or clones should be thought through multiple times. As each had their own advantages and disadvantages, the decision on what to buy entirely lies on convenience and preferable on your condition.

Whatever it is, clone or seeds, it will be definitely a rough and enjoying ride cultivating cannabis plants.