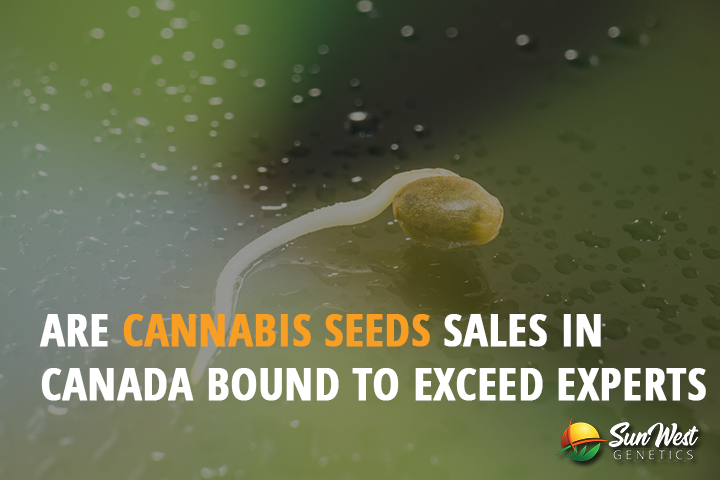 If Canadian business owners are to get down to conducting simple online research on cannabis seeds sales in Canada after the Cannabis Act came into force as of October 2018, they are bound to bump into the lack of sufficient data on that matter.

While stats on marijuana seeds sales for the fiscal year 2018 – 2019 can be found at the official website of Government of Canada, these statistics make up for a very, very small segment of the swiftly growing cannabis seeds sales business niche, and the rapidly increasing numbers of cannabis seeds sold both online, as well as offline.

Furthermore, there are so so many different sectors of the at-a-gallop pace expanding cannabis industry to be covered and monitored, that it is a real mess-acre out there. And in this mess-acre, experts are still failing to trace and evaluate accurately the tremendous, unexploited potential for profit from selling cannabis seeds, or “the magic beans,” as cannabis enthusiasts like to refer to the embryonic form of these tiny, precious cannabis-plants-to-be.

Canada’s Cannabis Seeds Retailers, Distributors, and Producers Landscape: A Messy Scenario for some, a Goldmine Opportunity for others

So far, experts have managed to come up with data regarding the monthly sales supply of dried cannabis flowers and cannabis oil combined, which are set at the mind-blowing 77 tonnes monthly. Yup, Canadians have been able to purchase legally, and have been purchasing legally, an estimated 77 tonnes of dried cannabis flowers and cannabis oil in the summer of 2019. The expected sales in the second half of 2019 are anticipated to kick in even higher.

The truth is, the Canadian marijuana industry still has a very long way to go, and without any doubt, it is hard to regulate and navigate a brand new industry like a pro from the very start (which is actually an aspect that all business owners understand painfully well from first-hand experience).

And so, some Canadian provinces decided to wait for greater clarity on cannabis seeds inventories before they move on with selling the magic beans, which is the case with Nova Scotia Liquor Group, as reported via e-mail for the Global and Mail Inc. in November 2018.

In the meantime, a big list of companies, including but not limited to the BC Liquor Stores, the NSLC, and the Alberta Gaming, Liquor and Cannabis agency, confirmed that they are planning on adding cannabis seeds to their inventory as soon as possible, yet none of these companies offered a timeline on that matter.

As a result of post-legalization seeds shortage and the skyrocketing demand for cannabis seeds, the consumer market reminded much of a Black Hole that is ready to swallow up anything that comes into the way, for the sake of planting the long-dreamed magic beans. Of course, plenty of businesses operating on the slippery line between following regulations and committing a law offense were getting ready to give cannabis growing enthusiasts what they have been craving for.

In the meantime, the lack of seed supply affected not only customers but retailers, as well, considering that every province that allows marijuana retailers also controls the distribution (except for Saskatchewan). What this means is that instead of being able to source directly from federally-licensed producers, private retailers must first buy from the provincial distributor.

Yet what cannabis growers want is not complicated explanations on when cannabis seeds will be finally available to purchase but instead, they simply want to start growing, opening up for massive moneymaking opportunities for those who manage to give them access to the desired product.

When evaluating the potential of the cannabis seeds business market, experts were faced with quite some difficulties when it comes to taking into account all the crucial segments that make growing weed such a rewarding experience for medical, occasional, and recreational users, as well as gardeners who aren’t really into consuming the green medication but are simply fascinated by the idea of being able to grow this intriguing plant legally for the very first time in history for centuries.

On the one hand, there are indoor cannabis growers. On the other hand, there are also outdoor cannabis growers. Of course, some grow weed both indoors and outdoors, while others do so in a greenhouse. With hydroponic setups, marijuana plants can grow much faster than when grown in soil. From tiny grow spaces to high-tech grow rooms, the Canadian government has no existing statistics on the number of different growers out there, and hence, there is no viable chart highlighting the true potential of cannabis seeds sales.

What business owners looking into profiting from selling cannabis seeds should best keep in mind is that growing weed from seed offers many versatile uses of the collected plant material upon harvesting, so it is hard to list the exact reasons why people purchase marijuana seeds. Some want to breed their own strains, others are into harvesting and drying the cannabis flowers but what a grower can choose to do with the cannabis flowers is also an endless field of possibilities.

Cannabis can be juiced raw (including leaves), it can be smoked, vaped, as well as used for the preparation of homemade edibles, tinctures, beverages, oils, topicals, and tons of other exciting marijuana derivatives. Therefore, it is only fair to state that cannabis seeds sales in Canada are, indeed, bound to exceed experts’ bravest expectations, and for the canny business owners out there, these precious bits of information are more than enough to help them realize why getting into this particular niche promises huge paybacks in return.