Home » Blog » Cannabis in the USA – All You Need to Know

Cannabis in the USA – All You Need to Know 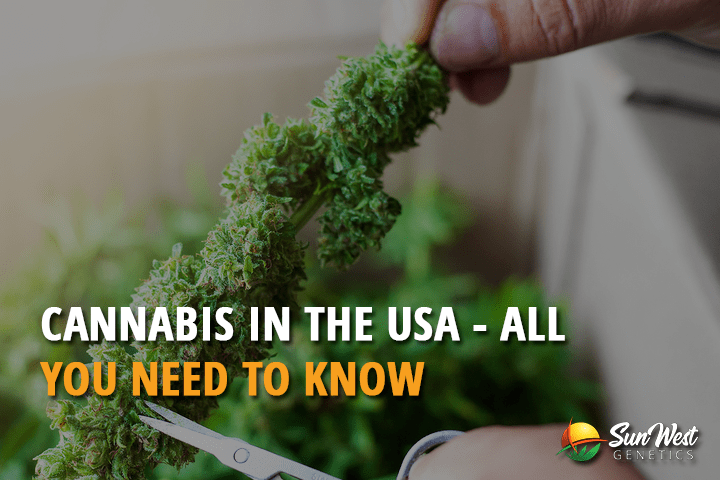 Cannabis in the wonderful United States of America is one of the most controversial topics in any debate. Some people think is a good idea that cannabis is legalized. Others do not think it would be a good idea.

And then there are those who really don’t care or are nonchalant about it. Regardless of what anyone thinks, some states are slowly legalizing cannabis one step at a time whether that will be decriminalizing it first then making possession legal or making it completely legal in one quick swoop.

Before anyone will realize it, autoflowering cannabis seeds will be for sale in the USA just like any other grocery item in the store. The following list is an up-to-date look of the states that are or are not for cannabis legalization from Disa

Although cannabis is a hot topic for most of America, in these states it has become a way of life. It is used for both recreational use and medical use. This means that the possession of these drugs cannot get you in jail. Of course, there are limitations so that this does not get out of hand.

Some of you may be thinking that completely legal and medical and dental insurance are the same when in fact, they are not the same. The difference is the decriminalization part. This is just a big word saying that the government shortened the amount of time you spend in jail if caught in one’s possession. Or another way states handled it is that instead of putting someone in jail for caught possession, a fine is put in its place.

The following states have legalized cannabis medically and decriminalized the punishment:

This one is pretty self-explanatory. These are the states that have legalized medical cannabis but not personal use. Some states, though, went even further and only legalized CBD oil.

What is CBD oil? According to the blog Healthline, this is an FDA approved therapeutic oil that is made from extracted CBD from Cannabis Sativa and then diluted with a carrier oil. This oil can either be from coconut oil or hemp seed oil. It relieves a client’s pain and other types of symptoms without the effect that THC causes.

It is known that the human body produces its own cannabinoids (CBD). According to research, there are two types of human-produced CBDS have been labeled CB1 and CB2. CB1 is known to have a part in a person’s coordination and movement as well as emotions, memories, thinking, and appetite. CB2 is known to mainly work with your immune system to combat inflammation and pain.

CBD oil has enough evidence to back it up in its medical claims. It is known to help with the following:

However, like with all medicines, it does come with its own set of side effects. These include diarrhea, fatigue, and changes in appetite.

As explained earlier, decriminalization is, in essence, a reduced prison sentence. These states have not legalized cannabis yet; however, they are giving the plant the recognition that it is not that serious of a crime anymore. This may have been because of the partial influence from their neighboring states.

The following states have decriminalized cannabis but have not legalized it yet:

Shortlist right? The reason behind this is that these three states are known for their drug dealings. These predominantly conservative states are know having to deal with outside influencers that make it hard to completely illegalize cannabis.

Yes, and here we are. The handful of states that are still holding on to the “War on Drugs” mindset. Most of these states are known for their rural countrysides filled with conservatives. Although the cannabis tension is high (no pun intended), these states are still wanting to hold on to safety.

The following states will not tolerate cannabis of any kind medical or otherwise:

Autoflowering Cannabis Seeds for Sale in the US

There may not be a lot of places that sell autoflowering cannabis plants already grown but the seeds may be available. Start by going to your local cannabis farmer to look at autoflowering cannabis seeds for sale in the US. If you don’t have a local farmer, then go online. Unfortunately, there aren’t any US-Based online shops selling cannabis. The closest available country to buy from online is in Canada.

All in all, like with any controversial issue, cannabis is going to be the top of the talk for a long time. At least until it becomes legalized everywhere then it won’t be that bad of a problem. Of course, there are other issues such as State Legalization vs Federal Legalization, but let’s save that for another time.