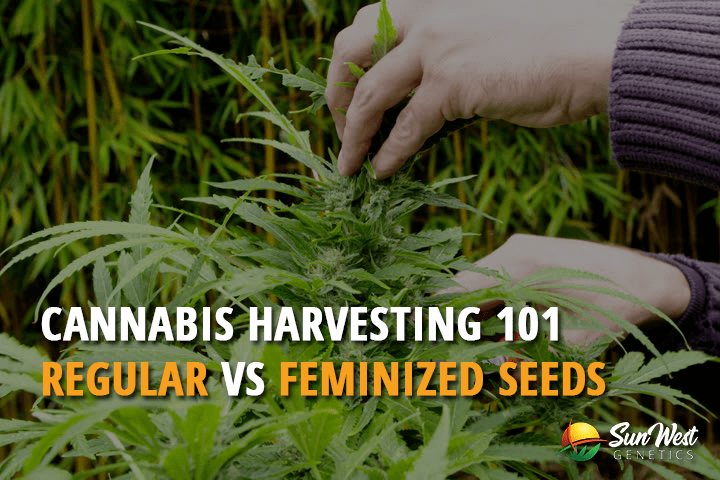 The ultimate goal for cannabis cultivation is a good harvest with efficient quantity and quality. That is why a lot of growers spent a lot of time from seed planting to harvest in order to assure that they’ll satisfy the main intentions on planting cannabis.

However, not all growers are aware that seed quality matters. Otherwise, it should be viable and healthy enough to survive during the cultivation process. It should be tested out thoroughly by taking few examinations into its appearance and texture.

Apart from that, it’s important to evaluate what type of seed and clarify what strain you’ll be planting. Generally, there are two types of seeds. The regular and feminized one.

In this article, we’ll examine and compare two of these two types of seeds in relation to harvest periods.

What are Regular Seeds?

Regular seeds refer to those seeds generated through the natural process of reproduction. These seeds offer original genetic variety eliminating any possibility of genetic alterations or mutations during its production. No intervention of chemical inducement or any external things is supplied and done through the seeds.

Seed generation is usually done through cross of a male and female cannabis plant. A more generic term for this process is called pollination. During this action, pollens obtained from the male plant will transfer it through the female’s plant stigma and goes down the ovule for which seeds will be developed. The naturally obtained seeds are named as ‘regular seeds’.

Nevertheless, regular seeds are not gender specific. It could be male or female depending on what genetic identity dominates during the reproduction process. Knowing the gender of the seed on this premature phase is not quite possible while examining only its physical characteristics.

However, if you’re eager to know its gender, then you’ll have to wait for its vegetative to pre-flowering phase to directly identify the gender of the cannabis plant. Likewise, it should bear reproductive organs before clarifying its gender.

What are Feminized Seeds?

As it literally means, feminized seeds are purely female seeds. These seeds are bred to express femininity, hereby, growing to be only female cannabis plants. Its female specific with minimal chances to go male or hermaphrodite depending on the conditions.

Feminized seeds are often obtained through artificial means. A particular chemical agent is being applied to a certain female cannabis plant to inhibit the bearing of any female related reproductive organs. As a surviving mechanism, the presumably female plant will be forced to bear male organs as a consequence of this action.

Thus, the cross between two female genetic identities will definitely result in a female one.

Is there a way to identify a seed’s gender?

While there is information spread online to readily identify the seed’s gender, it’s vital to realize that those are false claims and there is no way that you could examine a seed’s gender just by looking its physical characteristics.

However, there is something you could do to increase the chances of breeding feminized seeds without employing any artificial means. This is through adjusting the nutrient levels while cultivating cannabis plants.

According to a study, environmental factors do play some role in determining the sex of future offspring of a cannabis plant. Adjusting one factor to another could either promote masculinity or femininity of cannabis seed.

Likewise, increasing the nitrogen levels have found to promote seed feminization. While the latter decreasing it will tolerate the production of male seeds. However, this fact is adversely opposite to potassium levels. Lowering the potassium content will increase the chances of exhibiting feminism while reversing it will induce its male counterpart.

Aside from that, fourteen hours of daylight treatment encourages feminism. Whereas, prolonging the treatment to more than fourteen hours will exhibit more of its masculinity upon cultivation.

Though these factors play quite some role, it’s essential to know that genetics take a major part in deciding the gender of a particular seed.

Harvesting on Feminized and Regular Seeds

In general case, there’s entirely no difference on the yield or the potency whatever seed type you’ll be planting. As long as it had grown to be female and bear few buds, then there’s nothing to be weary on the type of seed you’d use on planting. It will definitely not thoroughly affect the growing process. It solely depends on the nutrient content, lighting, and what type of strain you have used on cultivation. Your effort as a grower matters as to how much buds you’ll get and its quality.

Perhaps, the decision of getting feminized or regular seeds is only critical during the early stages of cultivation. An easier and more practical path for bud production is through using feminized seeds rather than using the regular one. It will require less effort and could save a lot of your time when growing cannabis. Apart from that, it’s a great option if you’ll be growing in a limited medium and space.

Cultivation using feminized seeds defeats of the risks with cultivating male cannabis plants along with few female ones. Also, it eliminates the dangers of unintentional seed breeding during the course of cultivation. It’s the best shot most especially to first time or amateur growers who are still learning on cannabis cultivation.

Whatever type of seed you’ll employ, it doesn’t really quite matter. The success of cannabis cultivation entirely lies mainly to the effort, knowledge, and time you’d pour into while growing. The type of seed or strain affects minimally into the bud’s quality and potency. Like being said, the future lies into your own hands. Similarly, this connotation also applies to cannabis planting.