Home » Blog » The Truth About Cannabis Autoflowers Being Genetically Modified

The Truth About Cannabis Autoflowers Being Genetically Modified 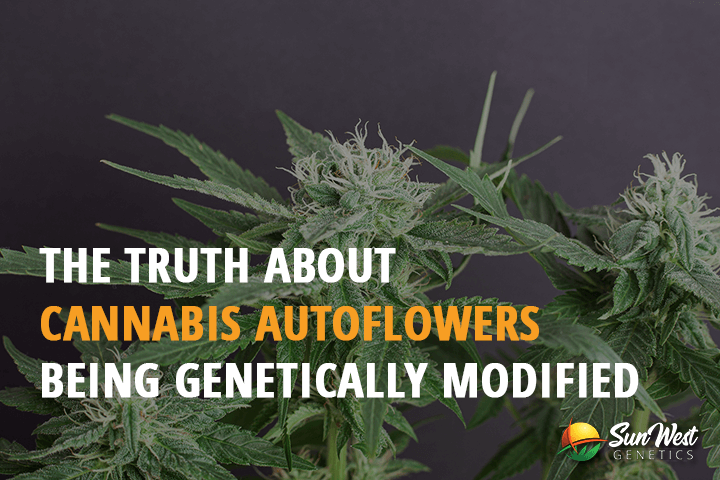 The rise of auto-flowering strains is a revolutionary turn in the Cannabis cultivation. It matures and finishes ultra fast.

Even with the time-saving trait, it only needs minimal effort, and a special lighting schedule is not necessary. Growers don’t have to wait too long to get a high yield of quality buds.

You may be one of the many who want to know how breeders come up with auto strains, so it’s a wise move to delve deeper into its history.

The main reason why this strain is auto-flowering is because of Cannabis Ruderalis. This plant was originally from Central and Eastern Europe.

It can also be found in America and Canada these days. The word ‘ruderalis’ was derived from the German word ‘ruderal,’ and its meaning is ‘weeds growing by the roadside.’

There are many claims from various botanists about the classification of Ruderalis. Some said that it is a species on her own, so that makes Indica and Sativa her siblings. There’s a claim that it is a subspecies of Sativa that parted ways from the outdoor plantation and started growing in the wild.

Ruderalis thrives in Central and Eastern Europe, where summer is short and colder. It got used to an environment that is completely different from where Sativa and Indica come from.

The summer in the origin place of Ruderalis has 24 hours light, so the plant can’t take a rest at night. Then it adapted to the climate to survive.

So it started to flower earlier and quicker, and it transformed into an auto-flowering variety at one point.

The Mongolian Academy of Sciences conducted a study on shamanic and folk knowledge of medicinal plants in the nineties. Part of its history is its medical usage in Mongolian and Russian shamanistic traditions.

Both Ruderalis and Sativa are used for medical applications in Mongolia. Though Cannabis Ruderalis doesn’t have a psychoactive effect, shamans still used it to reach their shamanic trance.

Some Cannabis growers in Canada began to experiment with Ruderalis in the 1970s and 1980s. They crossed it with Sativa and Indica.

During that time, the founder of Sensi Seeds, who is Neville Schoenmaker, was also working on the combination of Ruderalis, Sativa, and Indica in the Netherlands.

These people were able to come up with the product of the crossing, but they failed to make it stable. So they stopped working on it.

Lowryder by The Joint Doctor

The introduction of Lowryder strain by The Joint Doctor drastically changed the perspective towards breeding of auto-flowering strain. This hybrid strain was completed by crossing Ruderalis to Northern Lights #2 and William’s Wonder.

Lowryder is the first-ever commercialized auto-flowering strain, and it cast hope for the auto strain to be included in the Cannabis community.

A Mexican friend of The Joint Doctor called Antonio was the one who introduced Ruderalis. He called the seeds ‘Mexican Rudy’.

The Joint Doctor reckoned that Mexican Rudy is a blend of a certain Mexican strain and Ruderalis from Russia. It was probably produced during the ’70s of the University of Mississippi.

The Joint Doctor researched high and low about the strain, but he only found obscure references. He found out in some cases that the strain was kept and grown in Canada before he had it on his hands.

How did The Joint Doctor Make Lowryder Strain?

The Joint Doctor found out that Mexican Rudy matures quicker than the usual strain. Northern Lights strain was chosen for its short stature and high THC content to cross with it.

It resulted in F1 seeds that grow quickly into a nice and compact plant. But it didn’t turn out to be an auto-flowering type.

So he picked some of the best clones, and one of them is William’s Wonder. To his surprise, the result of F1 combined with William’s Wonder produced male plants that flower immediately even if they only have few leaves.

These male plants were used for pollination to create a set of fully auto strain. It takes a total of 60 days from seeds to harvest.

The plants didn’t stretch more than 12 inches, so it’s ideal for small closet cultivators. At that time, The Joint Doctor realized he made something special.

The first blend of Ruderalis, Northern Lights #2, and William’s Wonder was named Willy’s Automatic. The Joint Doctor kept on working for its stability.

With the creation of 5 or 6 generations, The Joint Doctor was able to release the first stable auto-flowering Cannabis he named as Lowryder.

The public was skeptical about the release of Lowryder. It is not exceptionally high-yielding, and the potency is not that high. Some people disliked their taste.

But what is outstanding about Lowryder is its unusual capability to flower in a short period. It is something that growers would appreciate a lot.

The Joint Doctor craved improvement in his work, so he started experimenting again. He chose a stable strain from Brazil called Santa Maria to be paired with Lowryder.

The outcome of this cross was astonishing. The flavor was enhanced, and potency got stronger than Lowryder. It can produce high yield too.

This strain was named Lowryder #2. It created a buzz, and growers were influenced to go after auto-flowering strain. Who can resist its fast flowering time and abundant harvest?

The Joint Doctor has made more auto-flowering Cannabis called Diesel Ryder, Easy Ryder, and Chronic Ryder. Making auto strain is not as automatic as its traits because it took a lot of strain crossing generations to claim stability.

With the history and development of auto strain unveiled, it is clear that it was done out of Ruderalis’ traits that were developed to survive in a new climate.

It was discovered through breeding and crossbreeding. These are the usual processes when making a hybrid strain.

To compare the growth development of regular Cannabis strain to the auto-flowering type would show you the differences. Hence, it is to emphasize the advantages of auto-flowering Cannabis.

Regular Cannabis plants will begin growing or sprouting in spring. Its growth continues the whole summer, and it turns into the blooming period in early fall.

After completing pollination, harvest can be done before it gets too cold in winter. Growers would usually spend seven and a half months for a regular strain.

There will only be one cropping each year, no matter which month you will start cultivating.

Germinated auto-flowering seeds are expected to bloom after 3 weeks. The blooming time will occur at precisely 8 weeks.

This short growth development will allow cultivators to have crops three times a year. But freezing temperatures may lower the chances.

So growers would opt for indoor cultivation.

It will surely increase your profit, and it will have a staggering effect if it’s your first time to have this variety in your garden. The indoor setting is ideal for auto strain, as the light can’t possibly be interrupted.

Sea of Green growing method would let this plant grow as wells as heightening the production of seeds and the amount of profit.

Advantage and Disadvantage of Indoor Cultivation of Autoflowering Cannabis

Auto strains’ capability to mature fast is simply amazing. It seems growing it will come as a piece of cake.

There are two sides of the coin os there will be an advantage and disadvantage in growing it indoors specifically for novice growers. To start the cultivation, a grower should procure seeds as clippings are not available.

You will always start with seeds when growing auto strain. So, where would you get them?

They’re popular and in demand, and you even avail them online. They can be expensive, but still, you can gain profit.

Why? You can buy auto-flowering seeds and do the processes of pollination on your own to produce thousands of seeds. It is costly to buy seeds every season.

By thousands of seeds formed, auto-flowering seeds is the most effective way to save money.

The disadvantage of growing this type of strain is the quality of the production. It’s a fact that it can produce faster than regular ones, but the yield is lighter compared to the harvest done from Sativa and Indica plants.

Growing Autoflowering Cannabis on your Own

A grower should be well prepared before the growing of auto-flowering Cannabis starts. It will be at the fast pace of development even though you’re ready or not.

Here are some steps you can keep in mind to have successful cultivation.

Training Cannabis plant is advised during the vegetative stage. Growers should take note that with the auto strain, it can be as early as 2 weeks after germination.

Topping can be done once three nodes developed to have an even canopy. It can be pulled down sideways and apply Low-stress training to guide it in growing upwards.

The topping should be put in a halt when it’s a week before flowering time.

Autoflowering Cannabis doesn’t require photoperiod light cycles. Regular strain may still be in the vegetative stage, but it has already started flowering.

Growers should keep in mind that the plant still needs warmth. If there’s a lot of rain in your area, you should protect it from a lot of moisture to prevent root rot.

So it’s safe to consider growing them in a greenhouse so they can be protected from harmful factors.

The auto strain doesn’t need to be heavily fed based on their small size and the short vegetative stage. They’ll be happy to be fed lightly and not much nitrogen.

This strain doesn’t develop a canopy, so buds on the lower part of the plant should be kept. You need to do the harvesting sequentially.

You can take the colas first then allow the lower buds to dense up to be harvested later on.

5. Preparation for the Next Crop

While you’re on the process of harvesting, you might as well prepare for the next plantation. You can germinate and grow seedlings, so the production doesn’t cease.

You can keep on doing this because no matter what stage the auto plants are, they can be on the same lighting.