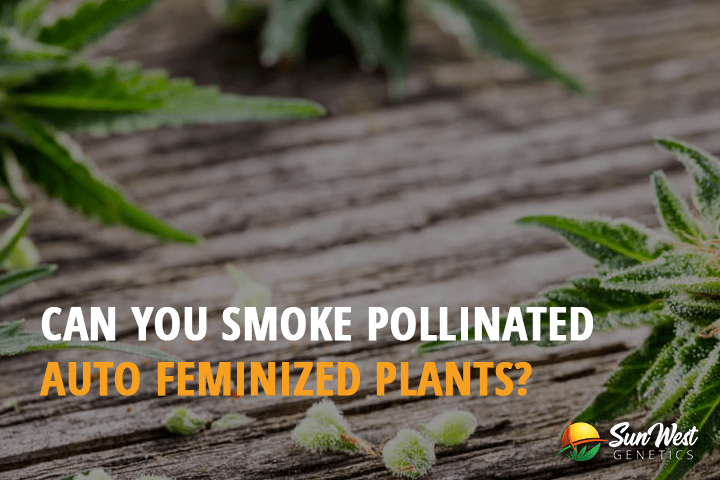 Feminized marijuana plants are naturally preferred by growers for their better yield, crop control, and higher THC content. However, unplanned occurrences happen when you have a whole batch of female plants and you did not know that is one male among the bunch.

This male plant will eventually produce pollen and when left unchecked may release its load of pollen and pollinate your female plants that are about to produce seeds soon within a few weeks. Due to pollination, the female plants would divert all its energy in the production of seeds instead of more buds which are harvested for THC and CBD. This diversion of energy leads to physical changes in the characteristic of the bud even before the production of seeds.

A male plant in the midst of your female plants could spell disaster as you are expecting to harvest buds that shall become all but useless when they are pollinated except when you intend to plant the seeds produced instead. Pollinated buds are about to produce seeds by being pollinated by pollen from a male plant by natural means such as insects or wind scattering or by artificial means such as controlled pollinated by the cultivator.

SIGNS OF A POLLINATED PLANT

Among the signs of a pollinated female plant is that is bracts become larger. Bracts are small plant parts that look like leaves and serve as a form of protection for the female reproductive parts of the marijuana plant. This is where the buds appear. Using a tweezer, you could easily open up a bract and see whether there is a seed or not. The color of the pistil hairs also change. They become darker in color when they are pollinated. Pistils are the female organs of a flower, comprising the stigma, style, and ovary.

Sadly there is no easy way to determine whether your plant is male or female except by waiting for its pre-flowering stage. The females will show white hairs in their nodes or the area between the stalk and the stem while males do not. Males develop pollen sacs instead. It takes about four to six weeks for seeds to develop but once the bud is pollinated there is no going back.

The easiest way to make sure that your plants are not accidentally pollinated is by planting feminized seeds which are guaranteed to be females that shall produce the much-desired buds for you to harvest. However, when all else fails, if our plants get pollinated despite our efforts, can we smoke pollinated marijuana buds? A marijuana plant could produce thousands of seeds which could last for a long time, so could we make use of it for recreational use instead of just planting it?

WHY YOU SHOULD NOT SMOKE POLLINATED MARIJUANA

Most marijuana users answer on the positive that you could smoke pollinated weed. You could smoke it in a joint, a pipe and others. It will not make you sick but they never really want anyone to try it for the following reasons, whether they are feminized, auto-flowering or regular strains.

Pollinated marijuana buds soon will have seeds even if seeds do not appear and this chemical change in the bud causes the bad taste, smell and overall quality of the weed smoking experience. The chemical changes in the flowers of the plant are enough to cause changes in its taste most of all. Smoking pollinated flowers or even seeds are described as unpleasant to the senses.

Some people may say that they could sift off the seeds and remove it from the rest of the buds but since the production of seeds has already become a priority for the plant, the THC content of this bud that is pollinated or has already produced seeds is reduced. Smoking such a joint with pollinated marijuana will not have the same effect of making you high or stoned just like the high-quality buds you used to smoke even if they came from the same variety. It is reported that the THC content of the pollinated marijuana bud or even the seed itself is up to 33 percent less than what is normally found in a non-pollinated bud.

Others have suggested heating the seeds or pollinated buds in order for the THC to be released to be consumed or eaten not smoked. Cannabis seeds contain nutrients and essential fatty acids such as Omega 3, Omega 6, and Omega 9.

Naturally, we may conclude that we can smoke pollinated feminized plants but that does not mean that you should. Marijuana has been used for a long time by humans to cure different ailments but all we ever smoked is the buds. We smoked neither the seeds nor the leaves and our collective experiences have proven it.

We have derived oil and wax from the buds which contain a high concentration of THC and CBD for smoking, ingesting, being mixed with food, being used as an active ingredient in medicines and other practical uses but never the seeds except that these seeds are ingested, not smoked.

The reasons provided by experts and recreational and medical marijuana users prove that there is no way that we could smoke marijuana other than the part that was intended to be smoked and that is none other than the bud and nothing else.