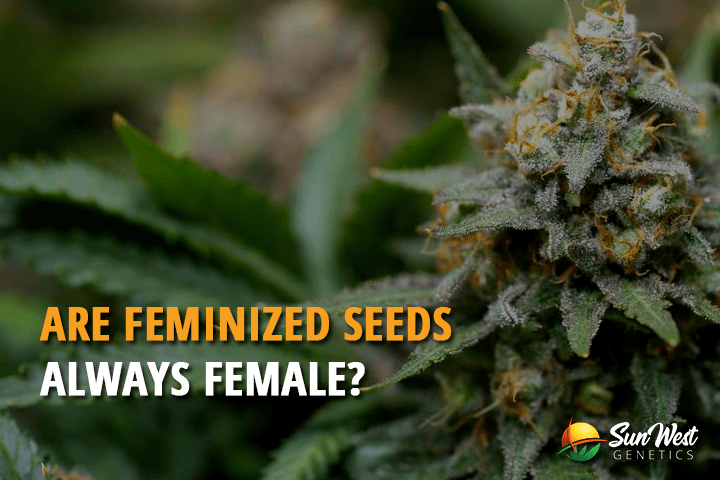 Nowadays when you go online to check on marijuana seeds, you will notice that there are a lot of cheap feminized seeds being sold in plenty of cannabis seed banks. This is due in large part to the increasing demand of marijuana seeds and buds sold online.

That said, cheap may be good if you want to make sure that you get to maximize your profits. It can also be good if you are lucky enough to find high-quality yet very affordable feminized marijuana seeds. But the problem lies in the possibility that the feminized seeds you got won’t end up as actual female marijuana plants.

In that regard, there is a need for us to know whether or not feminized seeds will always turn out to be female plants.

What are feminized marijuana seeds?

Feminized marijuana seeds are seeds that end up to grow as female instead of making you run the risk of ending up with male cannabis plants. But why is that so important? Well, you have to understand the roles of both male and female marijuana plants first.

Meanwhile, female marijuana plants are the useful ones. That is because they grow and develop buds or flowers that can be consumed for all of the THC and chemical compounds they contain. And when these buds get pollinated, they will produce marijuana seeds. But the problem is that whenever your females get pollinated, they tend to put all their attention and energy into producing seeds instead of buds. As such, you do not want your females near any males if you want them to develop buds of the highest quality possible.

This is where feminized seeds become so important. The thing about these seeds is that they will only end up as females. As such, your cannabis grow space will be much more efficient. You also get to dispense with the hassle of running the risk of wasting your time growing regular seeds only for them to end up as males that can cause more harm than good to your bud production.

Is there an assurance that your feminized seeds end up as female plants?

Before we get there, let us first explore the ways of producing feminized marijuana seeds:

The Rodelization of producing marijuana seeds is the more natural way of getting feminized variants of cannabis. You simply have to rely on Mother Nature to do its thing here and you do not even have to use any chemicals or artificial solutions to get the desired results.

What you need to do here is to watch your female plants and wait for any signs of hermaphrodites, which are female plants that were forced to develop male characteristics such as pollen sacs. It can be pretty difficult to pinpoint exactly what forces hermaphroditism to happens. Some would say that certain environmental stresses will force your plants to become hermaphrodites in an attempt to get pregnant and to prevent their own extinction.

Whatever your plants’ reason to become hermaphrodites is, it is important for you to constantly check your females to see if hermaphroditism occurred. When it does, you can collect the pollen sacs from your hermaphrodites and use them on your other female marijuana plants seeds produced using this method will end up feminized.

By introducing a colloidal silver solution to your mature female marijuana plants, you will be preventing the hormone that is responsible for developing flowers or buds. As such, when you use this solution on a regular basis for as much as two weeks, you will be introducing your females to a stressful situation which will eventually cause them to develop pollen sacs.

After collecting the sacs, put them in a cool and dry place and wait for them to dry out. Once they do, you can use the pollen sacs you collected from those plants to produce your own feminized seeds by introducing their pollen to female marijuana buds.

So, how do those methods related to whether or not feminized seeds will grow up as female plants? Well, those methods can contribute greatly to hermaphroditism, which is a concept that was explained in brief early on.

As mentioned, hermaphroditism is when your female marijuana plants develop male characteristics as a response to the different stresses in the environment. Some females tend to become hermaphrodites when they are left too long during their flowering period. They will be forced to turn into hermies when that happens because they want to pollinate themselves. Hermies naturally produced this way will most likely have male genetics.

So, when you use the Rodelization method when producing feminized seeds, there is a real risk that you also be passing down the hermaphrodite genetic trait to the feminized seeds you produced. In comparison, using the colloidal silver method reduces the risk of hermies from occurring because the one that supplies the pollen still is female as far as its genetics are concerned since you only forced it to develop pollen sacs through artificial means.

But, even if you got your feminized seeds from a seller that uses the colloidal silver method, there still is no assurance that you can avoid getting hermies. Hermaphroditism is also dependent largely on the genetic background, the chemicals they get exposed to, and the different environmental conditions that may cause high stress.

Because there is no surefire way to avoid hermaphroditism, what you need to do as a grower is to keep your eyes on your plants and to observe the females closely for signs of hermaphroditism. Hermaphrodites are not as obvious as male marijuana plants are because they have smaller pollen sacs and they still have almost all of the tell-tale signs of being females. As such, you really have to look at your females one by one and make sure you discard hermaphrodites the moment you detect them.