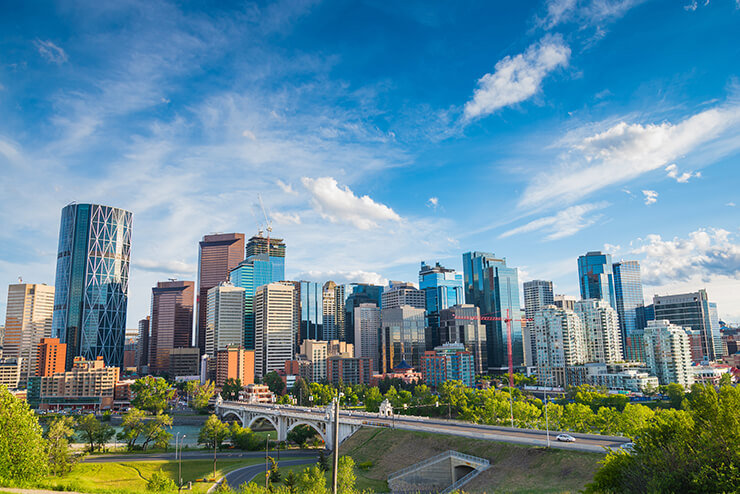 Because the flourishing country of Canada is known to be one of the pioneers of cannabis legalization throughout the whole world, it should come as no surprise that many of Canada’s provinces have resorted to allowing the use, possession, and cultivation of cannabis for both adult and medical uses. One province in particular that stands out among the rest is Alberta. Because of the rather lax and forgiving policies that govern cannabis in Alberta, the marijuana use and consumption rate of the province is the highest ever found in Canada! In fact, Alberta is known to be the leading consumer of medical marijuana in the whole country. However, it wasn’t only until recently that the cannabis scene in Alberta became what it is today.

As a Canadian online marijuana seed bank, Sunwest Genetics is a premium choice for those who are looking for high quality weed seeds in Alberta! With our expertise in developing and breeding some of the best and most potent marijuana seeds that you will find anywhere on the Internet, you are sure to get the best value for what you pay. SunWest Genetics will also make sure that residents and local growers of Alberta will not have to step one foot outside of their homes in order to get the best seeds in the country!

Is it Legal to Buy Marijuana Seeds Online in Alberta?

Just like the majority of countries around the globe, Canada was also one of those to prohibit and embargo all cannabis activities such consumption and cultivation during the early 1900s. Because of the adverse effects that it had displayed in workers and social smokers, many people had viewed marijuana as a dangerous drug. It wasn’t until April 2017, just roughly around 3 years ago, when a bill which sought to legalize cannabis in Canada was introduced to the Legislative branch for review.

The following year, on October 17, 2018, the Bill C-45 came into effect, officially making cannabis and marijuana legal across The Great White North. The passing of this bill into law marked an important milestone in the cannabis history of Canada, making it available across the whole nation for both medical and recreational/adult use.

The bill opened up the opportunity for Canadians, which included Alberta residents in particular, to consume cannabis as well as cultivate it and distribute it throughout their respective counties. Of course, many laws still govern the use of cannabis in Alberta in order to regulate and reduce the risk of anyone that might abuse the said substance. Because marijuana is seen as a natural commodity in Alberta and Canada’s markets, it is regulated and controlled by taxing authorities of the country/province.

Additionally, enforcement agencies of the Canadian Government also function to make sure no cannabis-related crimes take place in Alberta. The Canadian Cannabis Chamber, a non-profit organization that seeks to promote the cannabis scene all across Canada, is also situated in Alberta.

Unlike in the USA, the legal age requirement in order to qualify for cannabis possession and consumption is 18 years old. This applies to both medical and recreational use of marijuana. Here are some other cannabis rules and regulations to keep in mind when in the prosperous province of Alberta, Canada:

Adults who are at least 18 years of age are allowed to carry up to a maximum of 30 grams of marijuana in public. The same limit applies per transaction of purchase. Additionally, people under the age of 18 who are caught in possession of up to 5 grams are subject to a civil infraction. Anything above 5 grams, however, will result in criminal charges.
Purchasing cannabis is allowed from government-established dispensaries, personal businesses, and online seed banks.

Cannabis consumption can be done in all available forms which includes: smoking, edibles, topicals, tinctures, extracts, oils, and many more. While it is recommended that all marijuana consumption activities be done in private, there are also some permitted establishments that allow on-site smoking. It is legal to consume marijuana in any place that it is legal to smoke tobacco.

As such, places that should be kept away from cannabis consumption include: Schools, churches, playgrounds, public parks, theaters, zoos, outdoor fields, hospitals, and other areas which expose the public to marijuana.

Households in which adults who are aged 18 years or older may be allowed to cultivate up to four (4) cannabis plants, regardless of the number of adults living in the residence. Marijuana seeds must be obtained from licensed and official cannabis distributors such as SunWest Genetics.

How can I Buy Marijuana Seeds Online in Alberta?

SunWest Genetics is made readily accessible through our website and social media platforms. In order to purchase our weed seeds if you are located in Alberta, simply head over to our website and pick a marijuana strain of your choosing. Our team over at SunWest Genetics operates a very user-friendly and simple website that allows customers to freely browse our inventories.

From regular weed seeds all the way to CBD-rich strains, SunWest Genetics has practically every seed that you could ask for! With more than 400 various marijuana strains to choose from, SunWest Genetics prides itself in being able to maintain a high standard of both quality and quantity! We also have a 24/7 Customer Service Representative team which buyers could use to assist them with any concerns that they may have with our products or the ordering process.

This autoflowering hybrid definitely brings a sweet sensation to the tongues of all who smoke it! From germination all the way to harvest, all it takes is 11 weeks at most. This fast-growing strain offers a relatively easy growing experience and profiles of fruits, citrus, and tropical sunshine in your palettes and nose. It carries a THC level of 13% to 15%, which is enough to induce a very mellow and smooth physical high that relaxes the body.

This 90% sativa-dominant hybrid defines what all tropical-based strains should be like! Despite a relatively moderate THC level that clocks in at around 14%, a couple hits of this strain can definitely get your head rocking. The clear-headed high helps smokers feel very light and relaxed while, at the same time, keeping them focused for any tasks that they have waiting for them. Because of its sativa-driven genetics, it may take up to 11 weeks of flowering time to get ready for harvest.

As its name suggests, Big Bud is the ultimate bringer of generous yields and oversized weed nugs! The Big Bud strain is an award-winning indica hybrid that carries a THC level of around 17% to 20%. When smoking its extremely chunky buds, you are given a very heavy and deep relaxation feeling brought by the thick smoke emitted from this. For many hours, users may find themselves locked onto their couch as the Big Bud slowly takes a hold of your mind. Big Bud has a flowering time of around 7 to 8 weeks.

Often regarded as the successor to the legendary Super Silver Haze, the Super Lemon Haze gives a much sweeter and more citrusy profile that one would expect. Its THC content can reach up to a formidable 25%, which might be a little too strong for beginner users. These buds will be ready in around 8 to 9 weeks of flowering time. Also, expect a very generous yield off of this beauty.

The LSD strain is a very well-balanced hybrid that is more psychedelic than most strains out there, hence its name. A few hits of this strain will definitely keep your mind stuck in a blissful, reality-altering dimension that will get you tripped out of your freakin’ head! Although it is generally an indica-dominant variant, it is more cerebral than physical. A THC content of 20% to 24% is probably why this strain hits so hard in the head. It takes an average of 9 to 10 weeks of flowering time with average yields.

Should I Buy Marijuana Seeds Online in Alberta?

Cannabis cultivation is fully legal in the Canadian province of Alberta, given that you stick to the allowed limits set by the laws. Whether you choose to grow cannabis plants for personal use, opening up a business, or for medical treatments, Alberta’s marijuana policies permit you to do so! With many marijuana dispensaries located all across the province, you may find it quite easy to access marijuana seeds wherever you are in Alberta!

Of course, one of the better choices to make is to buy your weed seeds online from SunWest Genetics! With us, you will be able to sort through a wide range of seeds and pick the one that suits you the most! Our reasonable prices coupled with seasonal promotions and discounts are aimed to help customers save as much money as they can without foregoing any of the quality that we guarantee! Each and every seed that we ship out contains an almost 100% guarantee of sprouting due to our high germination rates! Shop at SunWest Genetics now!