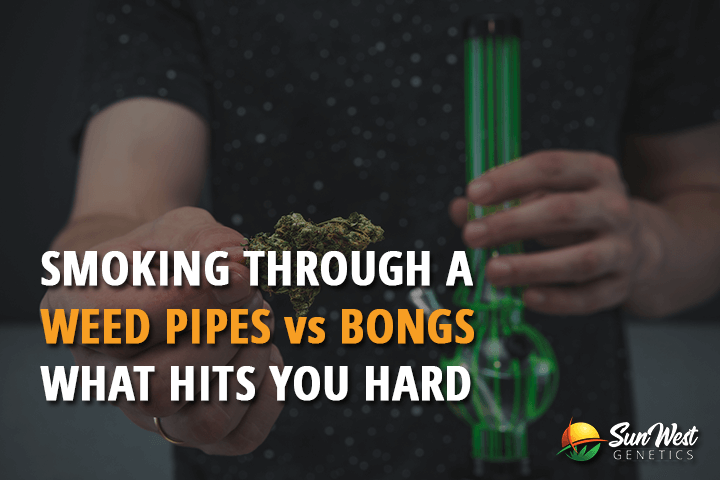 One of the wonders of marijuana consumption is there are dozens of ways to consume marijuana all of which correspond to our different tastes, dosage requirements or just plain marijuana gluttony. There is the traditional marijuana joint which is mere marijuana dried buds or oil rolled with marijuana rolling paper and is smoked just like ordinary cigarettes. There is also the dab rig, e-nails, vapes, pens, and others.

But for now, let us talk about some heavyweight stuff, something for the veterans, machos and those who thought that tomorrow is never coming. Today, we talk about weed pipes and bongs and more importantly, which one will hit you harder.

WHY WOULD YOU WANT A HIGHER DOSAGE?

For starters, this is, first of all, a question in taste. Some of us want the smooth sensation of slowly getting high or stoned with the use of joints while some of us want that sudden high that we could achieve with dab rigs. But some of us wanted more of the good things.

But there might be some people who may want the higher dosage due to necessity. Some of us wanted the soonest relief for their pain, inflammation or anxiety.

WHAT ARE WEED PIPES?

Weed pipes are pretty simple and straightforward tools to smoke marijuana. Pipes are reported to have been the first use in ancient Egypt where the extensive use of glass proliferated. There are even pipes found buried with the remains of Egyptians who died as early as 2000 BC. The use of the weed pipe in ancient Egypt may have religious significance and are believed to be something that would help the dead in the other world.

Religious use of the weed pipe has been reported from native Americans and one of the most popular uses of it are the peace pipes which are understood as gestures of goodwill and as an action during social events. Middle East, India, the Himalayas all have their versions of the weed pipe. Other than glass, weed pipes could also be made out of metal or wood. There are many different types of weed pipes that are classified according to their different shapes and sizes.

Hand pipes which are also known as spoons are probably the most common as they are smaller and discreet. Chillums or one-hitters are also small which got their name because of the limited amount of buds that you could fit into it which is usually enough for one inhalation or one hit. Steamrollers are sort of a hybrid between the hand pipe and the chillums in their shape.

There are basic parts of the weed pipe. The bowl where the buds are inserted. The carb is where air flows into the bowl. The flow of air into the bowl could be controlled by sealing the carb with your hand or finger. One-hitters do not have carbs. Lastly is the mouth or stem from where you inhale the smoke.

Weed pipes are pretty basic to use. Simply stuff broken up dried buds lightly without overpacking so as not to restrict airflow. Light up the bud and inhale smoke from the stem while controlling airflow through the carb. Once the bud is burning, remove the flame away and tap the carb with your fingers to control airflow. Repeat as long as there is cannabis in the bowl.

It is fairly easy to clean a weed pipe by simply submerging if on rubbing alcohol inside a plastic container or plastic bag. Leave this submerged to dislodge the resin in about 12 hours or more. Shake the pipe vigorously while it is still in the container for thorough cleaning. Once it is clean, you may remove it and proceed by washing it with soap and water just like any other glassware. Let the pipe dry before use.

WHAT ARE WEED BONGS?

Known simply as bongs, is a more complicated device because it has some form of water filtration in its construction. The word bong is believed to have originated from the Thai language that means, ‘bamboo pipe’.

Just like the weed pipes, bongs have been in use for thousands of years already with the earliest recorded use was from 2400 years go by Scythian tribal chiefs. Scythians are Eurasian nomads which have proliferated between 9th century BC up to 400 AD. The Chinese and other ancient civilizations have used the bong and another similar device which is the hookah which was constructed the same way but smaller.

Bongs are also used for tobacco and are labeled as ‘for tobacco use only’ in some countries for legal reasons.

Bongs are easy to use just like the weed pipe. Marijuana buds are stuffed inside the smaller pipe which is lit and the smoke is inhaled at the end of the bigger pipe. Cleaning and maintenance of the bong are easier since it has bigger interior surfaces that could be reached by brushes and other cleaners.

So for the verdict, on which will hit you harder. Both have their advantages and disadvantages. The pipes give you that raw experience while bongs have a more refined one due to the filtration. There have been differing opinions on whether the water filtration of the bong will reduce some of the THC but this smoother experience is a big plus for the bong.

The smoother hits with the bong will make you smoke more and will hit you harder with whatever you are smoking. The raw experience with the weed pipe, on the other hand, might put you off coughing with what you just smoked.