Marijuana Phenotype and Genotype: Understanding the Basics of Cannabis

Being around cannabis scene for so long, you will surely run into a few terms and words along the way. While it may seem uninteresting, getting to familiarize yourself with the scientific side will do you a lot of good. Let’s take genotype and phenotype for example. These are two very frequently use words in the cannabis industry that help people understand how marijuana develops.

Basically, a cannabis plant’s growth in terms of chemical structure (such as cannabinoids and terpenes) and physical profiles (such as smell, taste, and appearance) are because of its genetic makeup and environmental conditions. While many strains share the same characteristics with one another, you will find that each is definitely unique in its own ways!

Genotype vs. Phenotype: What Do They Mean?

As you begin taking larger steps towards understanding the cannabis cultivation process, you will notice a lot more than you usually would. One thing that confuses a lot of amateur growers, is that marijuana seeds of the same strain from the same pack grow different-looking plants! This may cause them to write it off as an inconsistency with the weed supplier. However, that is not the case.

Regardless of where you get your seeds, cannabis plants will display various characteristics. As we said, it takes both the genetic makeup and environmental conditions to fully bring out marijuana’s overall looks and profiles. And these, of course, can be also be through the genotype and phenotype of a plant.

Like human beings and just about any other living organism out there, cannabis plants are made up of certain genetic codes and interacting DNA that is called genotype. This genotype carries all the genetic qualities that will later manifest themselves as the cannabis plant starts to grow and develop.

Keep in mind that there are several possible outcomes regarding which genetic code actually makes its way into the world. This gives one strain an endless number of possible outcomes of how it will look, taste, and smell!

So how exactly does a plant’s genetic code choose which route to take? Well, it does, partly by chance but the growing conditions and environmental setup in which it is grown also have a say in it. When the genotype of a cannabis plant interacts with these conditions, all sorts of different responses manifest themselves! It may sound complicated but this is what growers actually go through in the cultivation process.

So why don’t my cannabis plants look the same?

As such, people would say that one version of White Widow is a phenotype version of another White Widow as they look different from one another. However, this is not entirely true. Why are they not similar despite the consistent growing conditions you place them in?

In reality, the genotype of a cannabis plant has just as much say in why cannabis plants look different. And this is nothing to worry about! As we said, there are numerous possibilities in the genetic code. 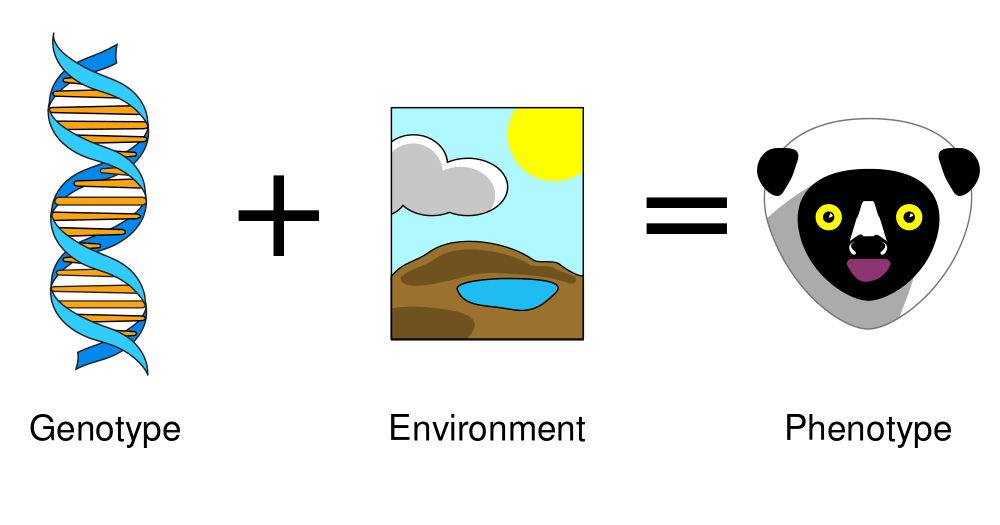 Growing them with consistent environments can still lead to one being taller than the other, displaying different shades of color, or even smelling different.

Where do Cannabis Genetics Come From?

With all this talk about cannabis qualities and genetics, it is important to actually know how marijuana first came to be. Some of the earliest records show that cannabis in general is use by numerous civilizations for thousands of years. As such, it is known as one of the first ever highly domesticated plants known to man. The history and background of cannabis is stretches so far back that it is quite difficult to trace back its exact origins. However, people now do have a brief idea of how it was first discovered.

Perhaps the earliest marijuana genetic discovery, the Hindu Kush strain, originated in the vast and dry land of Pakistan. Botanists and other scientists, upon studying the plant, concluded that marijuana strains thrived greatly in hot and warm climates. As such, people also found various landrace genetics growing in places such as Mexico, Colombia, Afghanistan, Thailand, South Africa, and other tropical areas.

Cannabis landrace genetics are organic, all-natural types of strains that developed through traditional circumstances. They generally come in two (2) major groups: the Cannabis Indica and Cannabis Sativa types of marijuana.

These types of marijuana offer different sets of qualities and profiles to growers and smokers alike. In fact, they contradict each other in virtually every category that there is!

Indica plants are short, trichome-filled marijuana plants that are characterized by having a very dense and compact structure. They tend to grow better under cool and damp climates. Indica seeds display a rich green color which may also yield certain purple hue when expose to slightly cold temperatures.

As for the high, indica strains offer more of a physical and relaxing effect that makes users feel stoned. The deeply tranquil effects may be strong enough to induce a couchlock feeling. This effect numbs the body and immobilizes smokers with strong massaging sensations.

Sativa plants, on the other hand, have very tall and lanky structures. Their thin and finger-like leaves fan out in all directions. Sativa strains tend to have a much brighter shade of green with some yellow hues. Because sativa strains are very loose and slender, they do very well under the heat. Because they are known to be less tolerable with cool weathers, they are often grown outdoors in places with sunlight.

Sativa strains will primarily induce a very vibrant and uplifting high. The energizing effects lead people to classify sativa strains as bringing a more “high” and “trippy” feeling. The effects of sativa strains are cerebral in nature, capable of being psychedelic and mind-altering.

Cannabis plants are undoubtedly accustomed to a natural environment where they can grow under organic setups and sunlight. However, we all know that there are cases where growing marijuana plants out in public is not possible! In such instances, indoor growing of cannabis is the best route to take.

For a long time, planting weed seeds outdoors seemed like the only possible way to grow healthy cannabis plants. It wasn’t up until the 1970s when people found a way to cultivate them inside hidden and safe places.

A lot of factors come into play when deciding whether or not to use an indoor setup. Many countries around the world undoubtedly ban and prohibit the use of cannabis, let alone cultivate them. This led to people simulating an outdoor environment in order to generate the best cannabis plants possible in an indoor setup.

How do you grow cannabis indoors?

Indoor growing will definitely impact the phenotype of a cannabis seed. Because of the change in environment for cannabis plants, you are bound to get various results when comparing to growing them outdoors! Now, indoor growing offers a whole lot of benefits. For one, you will have complete control over all the factors in your growing area. The lighting, air circulation, and even the temperatures are all regulated inside an indoor setup.

There are many ways in which you can do this. Setting up your grow room in your house is one of the best and discreet ways of planting cannabis indoors. Other methods include using grow tents, indoor grow boxes, greenhouses, hydroponic systems, and even cabinets and shelves.

If done properly, an indoor setup can definitely simulate all the best conditions that outdoor growing has. Keep in mind, however, that the phenotype that comes with indoor growing will never be the same as in outdoor growing. The limits of indoor setups may hinder the cannabis plants from reaching their full potential.

Cannabis Clones: The Only Exception

Wait a minute, if each and every cannabis plant contains unique genotypes and phenotypes from one another, then why in the world do clones look the same? Clones that grow in a constant environment will look the same as their mother plant and all other siblings. Well, now we can surely consider the use of cannabis clones to be the sole exception with the whole phenotype fiasco.

The use of clones to breed and produce cannabis plants will lead to them containing the exact same genetic code as its mother plant. This means that both the phenotype and genotype of the cannabis clones will have a 1:1 similarity. This carries over to the appearance, flavors, smells, and effects.

How is this possible, you might be wondering? Well, put simply, clones can technically be considered as a single plant given that all the cuttings come from just one mother. Instead of the usual cannabis plants that all contain unique and one-of-a-kind genetic structures, clones are practically carbon copies of one another.

Understanding the phenotype and genotype of cannabis can definitely help growers adjust their weed gardens for the better. Because of the endless possibilities that a cannabis plant’s genetic structure can be made up of, it should come as no surprise as to why they look different each and every time!

Final Thoughts on Phenotype and Genotype

Moreover, the presence of cannabis hybrids and all other sorts of marijuana only expands the list of what your weed plants can possibly look like! We hope that this article helps you understand the difference between a cannabis plant’s genotype and phenotype. The next time your weed buds look different under the same growing conditions, you won’t have to second guess why!